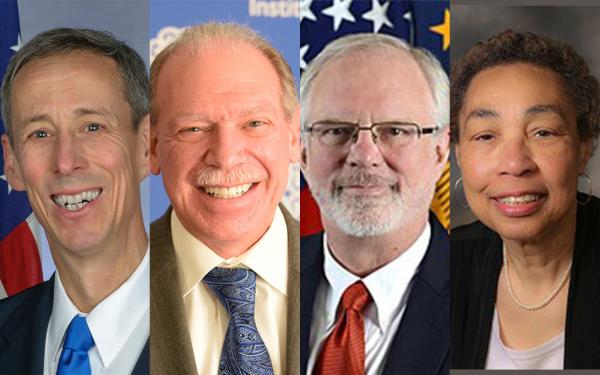 This in-person event is open to current University of Michigan students, faculty, and staff. Doors open at 3:30 pm, registration and check-in is required. U-M COVID related health policies will be followed including wearing masks and checking of the ResponsiBLUE app.

The Weiser Diplomacy Center at the University of Michigan’s Gerald R. Ford School of Public Policy and the American Academy of Diplomacy will co-host a discussion on China and the challenges facing the U.S.-China relationship. These challenges include managing disputes in areas such as the Taiwan Strait and the South China Sea; addressing developments in Hong Kong and Xinjiang; and navigating tensions over economic issues related to cybersecurity, intellectual property, and transparency in trade. Bilateral relations also occur in a shifting geostrategic landscape as China strengthens its continental linkages through the Belt and Road Initiative while the United States refocuses on its vision for a Free and Open Indo-Pacific.

An expert panel will explore elements of this relationship and will be moderated by Ambassador Gerald Feierstein. Ambassadors Sylvia Stanfield, Craig Allen, and David Shear will make up the panel.

From the speakers' bios
Jerry Feierstein retired from the U.S. Foreign Service in May 2016 after a 41-year career. At the time of his retirement, Feierstein held the personal rank of Career Minister. Feierstein currently serves as the Senior Vice President of the Middle East Institute. Over the course of his career, he served in nine overseas postings, including three tours of duty in Pakistan, as well as tours in Saudi Arabia, Oman, Lebanon, Jerusalem, and Tunisia. In 2010, President Obama appointed Feierstein U.S. Ambassador to Yemen, where he served until 2013. From 2013 until his retirement, Feierstein was Principal Deputy Assistant Secretary of State for Near East Affairs. In addition to his career-long focus on the Near East and South Asia, Feierstein also played a prominent role in developing and implementing State Department policies and programs to counter violent extremism. As Deputy Coordinator and Principal Deputy Coordinator in the State Department’s Counter-Terrorism bureau, Feierstein led the development of initiatives to build regional networks to confront extremist groups as well as to counter terrorist financing and promote counter-terrorism messaging. He continued to focus on defeating terrorist groups through his subsequent tours as Deputy Chief of Mission in Pakistan and as Ambassador to Yemen. Feierstein joined the Middle East Institute in October 2016 as a Senior Fellow and the Director of a new Center for Gulf Affairs.

Ambassador (retired) Sylvia Gaye Stanfield was the U.S. Ambassador to Brunei Darussalam from 1999-2002 and a career member of the U.S. Senior Foreign Service. Asia was the focus of much of her 30 plus years with the Foreign Service. Her first overseas assignment was with the then American Embassy in Taipei, Taiwan. As a political track Chinese language officer, she had postings with the U.S. Consulate General in Hong Kong, the U.S. Embassy in Beijing, and the American Institute in Taiwan in Taipei. She served on the State Department’s “China desk” at the time of the normalization of U.S. relations with the People’s Republic of China and later headed the Office of Taiwan Coordination Affairs. She was Director of Australian and New Zealand Affairs prior to serving as Charge d’Affaires and Deputy Chief of Mission of the U.S. Embassy in Wellington, New Zealand. Her wide-ranging Washington assignments included those with the Bureau of African Affairs, the Bureau of International Organizations Affairs, the Office of the Inspector General, the Board of Examiners, and the Senior Seminar. She was Diplomat-in-Residence at Florida A&M University and at Spelman College before serving as Senior Advisor for Mentoring Coordination at the Department of State.

On July 26, 2018, Craig Allen began his tenure in Washington, DC, as the sixth President of the United States-China Business Council (USCBC), a private, nonpartisan, nonprofit organization representing over 200 American companies doing business with China. Prior to joining USCBC, Craig had a long, distinguished career in US public service. Craig began his government career in 1985 at the Department of Commerce’s International Trade Administration (ITA). He entered government as a Presidential Management Intern, rotating through the four branches of ITA. From 1986 to 1988, he was an international economist in ITA’s China Office. In 1988, Craig transferred to the American Institute in Taiwan, where he served as Director of the American Trade Center in Taipei. He held this position until 1992, when he returned to the Department of Commerce for a three-year posting at the US Embassy in Beijing as Commercial Attaché. In 1995, Craig was assigned to the US Embassy in Tokyo, where he served as a Commercial Attaché. In 1998, he was promoted to Deputy Senior Commercial Officer. In 1999, Craig became a member of the Senior Foreign Service. From 2000, Craig served a two-year tour at the National Center for APEC in Seattle. While there, he worked on the APEC Summits in Brunei, China, and Mexico. In 2002, it was back to Beijing, where Craig served as the Senior Commercial Officer. In Beijing, Craig was promoted to the Minister Counselor rank of the Senior Foreign Service. After a four-year tour in South Africa, Craig became Deputy Assistant Secretary for Asia at the US Department of Commerce’s International Trade Administration. He later became Deputy Assistant Secretary for China. Craig was sworn in as the United States ambassador to Brunei Darussalam on December 19, 2014. He served there until July 2018, when he transitioned to President of the US-China Business Council. Craig received a B.A. from the University of Michigan in Political Science and Asian Studies in 1979. He received a Master of Science in Foreign Service from Georgetown University in 1985.

Ambassador David Shear is a senior adviser at McLarty Associates, a global strategic advisory firm. He is also chairman of the National Association of Japan-America Societies. He served as assistant secretary of defense for Asian and Pacific security affairs from 2014 to 2016, when he performed the duties of principal deputy under secretary of defense for policy. Prior to 2014, Ambassador Shear served for 32 years in the U.S. Foreign Service, most recently as the ambassador to Vietnam. He has also worked in Sapporo, Beijing, Tokyo, and Kuala Lumpur. In Washington, Ambassador Shear has served in the Offices of Japanese, Chinese, and Korean Affairs and as the special assistant to the under secretary for political affairs. He was director of the Office of Chinese and Mongolian Affairs in 2008-2009 and deputy assistant secretary in the Bureau of East Asian and Pacific Affairs in 2009-2011. He is the recipient of the State Department’s Superior Honor Award and the Defense Department’s Civilian Meritorious Service Award. He was a Rusk fellow at Georgetown University’s Institute for the Study of Diplomacy from 1998 to 1999. Ambassador Shear graduated from Earlham College and holds a master’s degree in international affairs from the Johns Hopkins School of Advanced International Studies. He has attended Waseda University, Taiwan National University, and Nanjing University. He speaks Chinese and Japanese.
Lieberthal-Rogel Center for Chinese Studies
Weiser Hall
500 Church Street, Suite 400
Ann Arbor, MI 48109-1042
chinese.studies@umich.edu
A member of the International Institute
734.764.6308
734.936.2948
Sitemap
Facebook Twitter Youtube