Diamonds by the Decade: The Best of CJS 75th Anniversary Film Series | A Night of Madness: A Page of Madness with benshi Nanako Yamauchi and Little Bang Theory 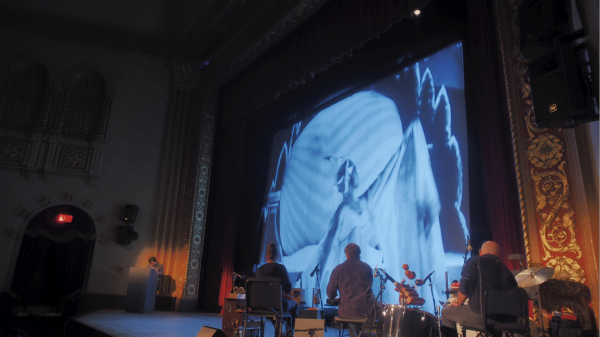 A Page of Madness is one of the greatest avant-garde films in history. It was directed by Teinosuke Kinugasa in 1926, and lost for nearly half a century. The story, by Nobel laureate Yasunari Kawabata, centers on a janitor at the insane asylum that holds his wife. Long considered a lost film, director Teinosuke Kinugasa thankfully found a negative in his garden storehouse in the 1970s.

Book your free tickets with the Michigan Theater here: https://myumi.ch/9P1en

Nanako Yamauchi
Nanako Yamauchi is a graduate of the Film Department at Nihon University, the oldest film school in Japan. She began studying the art of the benshi under Sawato Midori in 2010, performing for Matsuda Film Productions’ Friends of Silent Film Appreciation, various film festivals and the National Film Archive of Japan. In 2021 and 2022, Yamauchi was a supervising editor for Nasuno Mayuka’s manga about benshi entitled Ray—A Taisho Era Cinema Story.

Terri Sarris
Terri Sarris's creative work includes award-winning feature and short films (shot on 16mm, Super 8mm film, and digital media), film and television scripts, and work as a curator, film festival board member and festival juror in the larger media community, as well as performances in dance and music. Over three decades she helped build U-M's Department of Film, TV and Media Studies into a major presence in moving image media production and study.

Doug Shimmin
Doug Shimmin has been banging, strumming and singing his way around the metro Detroit area for more than 30 years. As a founding member of the award-winning, multi-ethnic group Immigrant Suns, Doug left behind his punk new wave flavors for the old world. After a great run of touring and performances, he sat down at a tiny table of toy instruments with friends Frank Pahl and Terri Sarris. From there they created Little Bang Theory, and it’s been miniature magic ever since.