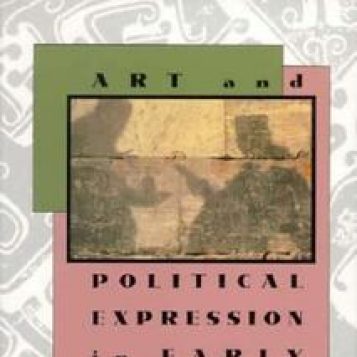 Winner of the 1991 Joseph Levenson Prize in the Pre-Twentieth Century category.

Political expression is not a term generally associated with ancient china. Nonetheless, in this pathbreaking book Martin J. Powers examines the art and politics of the Han dynasty (206 B.C.-A.D. 220) and shows that both were shaped by the rise of an educated, non-aristocratic public that questioned the authority of the rich and royals at all levels.

Eager to avoid political challenges from feudal vassals, the Han emperors established a bureaucratic system based upon a meritocratic standard of performance. Under this new, more mobile system, commoners began demanding a greater share of society’s resources and prerogatives, including the right to criticize state policy in essays, in art, and even in student demonstrations. In this same period, new narrative and genre themes appeared in art in response to the demands of a new class of patrons lacking either noble rank or extensive wealth. These “middle-income” patrons commissioned decorated monuments that no longer declared the privilege of inherited rank, but instead advanced pictorial arguments about such things as the nature of legitimacy or the criteria of justice. Tracing issues of political expression in such monuments, Powers examines the design and construction of local tombs and shrines, their mural schemes, subject matter, and style. The author takes the reader through a close analysis of the rhetorical features of stone inscriptions, critical essays, and official memorials. Discovering similar strategies in the art of middle-income patrons, he relates features of style directly to issues of political expression. Placing major trends inartistic taste within a narrative of political rivalries, Powers here traces both the triumphs and the follies of a public that rejected the cultural standards of the feudal courts and established an alternative culture capable of challenging the status quo in politics, taste, ideology, and the visual arts.