Broadening Jewish History: Toward a Social History of Ordinary Jews 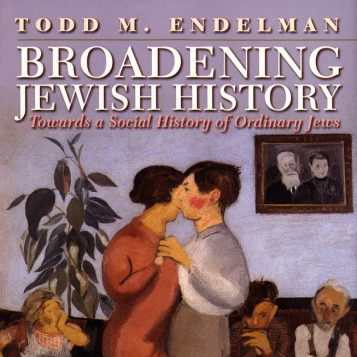 In Broadening Jewish History, author Todd Endelman expands the horizons of modern Jewish historiography by focusing on 'ordinary' rather than exceptional Jews, arguing that what those in the wider Jewish community did or felt does more to deepen our understanding of Jewish history than what a few exceptional individuals thought and wrote. His innovative study also makes a strong case for comparative history: only a comparison across national borders can reveal the Germanness of German Jewish history or the Englishness of English Jewish history, and thereby identify what is uniquely Jewish about each. Through a combination of historiographical essays and case studies, Endelman redefines the area under consideration and convincingly restates the need for Jewish social history to counterbalance the current focus on cultural studies. The essays constitute an important examination of the major trends in the writing of modern Jewish history. Here, the author spells out the assumptions that have guided historians in their narration of the Jewish past, and in particular how the two watershed events of 20th-century Jewish history - the Holocaust and the establishment of the State of Israel - influenced Jewish historiography for decades thereafter. No less important, though, is how integration into the broader scholarly framework of American academia has shaped both the form and the content of Jewish historical research. The need to revitalize Jewish social history is argued through a series of case studies examining the lives of largely unknown Jews whose careers vividly illustrate the often tortuous paths of integration and acceptance, among them: the London money broker, swindler, and political radical John King and the novelist and unabashed imperialist Gilbert Frankau. But, many of the Jews who populate the book remain altogether unknown, such as those who converted to Christianity in 19th-century Warsaw and whose histories are recoverable only as statistics. In its wide-ranging analysis of trends in recent historical writing and its treatment of key themes and issues, this book is essential reading for professional historians, students, and indeed all those with an interest in Jewish history.