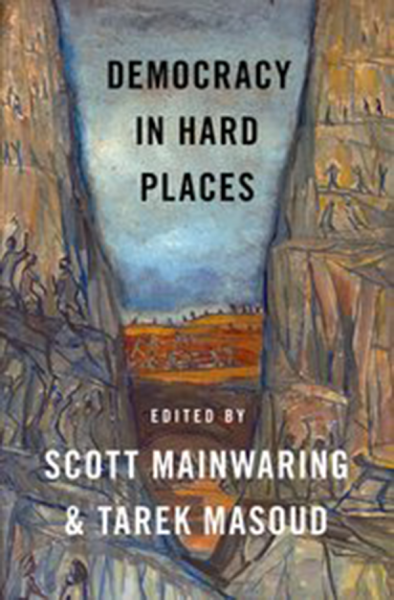 The last fifteen years have witnessed a "democratic recession." Democracies previously thought to be well-established--Hungary, Poland, Brazil, and even the United States--have been threatened by the rise of ultra-nationalist and populist leaders who pay lip-service to the will of the people while daily undermining the freedom and pluralism that are the foundations of democratic governance. The possibility of democratic collapse where we least expected it has added new urgency to the age-old inquiry into how democracy, once attained, can be made to last.

In Democracy in Hard Places, Scott Mainwaring and Tarek Masoud bring together a distinguished cast of contributors to illustrate how democracies around the world continue to survive even in an age of democratic decline. Collectively, they argue that we can learn much from democratic survivals that were just as unexpected as the democratic erosions that have occurred in some corners of the developed world.

Scott Mainwaring's research and teaching focus on democratization and authoritarianism, political parties and party systems, and Latin American politics. His work with Aníbal Pérez-Liñán, Democracies and Dictatorships in Latin America: Emergence, Survival, and Fall (Cambridge University Press, 2013) won the best book prizes of the Comparative Politics section of the American Political Science Association and of the Political Institutions section of the Latin American Studies Association. Mainwaring was elected to the American Academy of Arts and Sciences in 2010. In April 2019, PS: Political Science and Politics listed him as one of the 50 most cited political scientists in the world. He served as the Jorge Paulo Lemann Professor for Brazil Studies and as faculty co-chair of the Brazil Studies program at Harvard University from 2016 to 2019.

Tarek Masoud is the co-editor of the Journal of Democracy of the National Endowment for Democracy, and serves as the Faculty Director of the Kennedy School's Middle East Initiative and the Initiative on Democracy in Hard Places. His research focuses on political development in Arabic-speaking and Muslim-majority countries. He is the author of Counting Islam: Religion, Class, and Elections in Egypt (Cambridge University Press, 2014); The Arab Spring: Pathways of Repression and Reform with Jason Brownlee and Andrew Reynolds (Oxford University Press, 2015); and several articles and book chapters. He is a 2009 Carnegie Scholar, a trustee of the American University in Cairo, and the recipient of grants from the National Science Foundation and the Paul and Daisy Soros foundation, among others.

Rachel Beatty Riedl is the Director of Cornell's Einaudi Center. Her research interests include institutional development in new democracies, local governance and decentralization policy, authoritarian regime legacies, and religion and politics, with a regional focus in Sub-Saharan Africa. Previously, she was an Associate Professor in the Department of Political Science, Faculty Fellow in the Institute for Policy Research, and Director of the Program of African Studies at Northwestern University. She has also been a visiting fellow at the Yale Program on Democracy, the Kellogg Institute for International Studies, and the Princeton Institute for International and Regional Studies. She was a term member of the Council on Foreign Relations and served as Chair of the Democracy and Autocracy section of the American Political Science Association. Riedl is co-host of the podcast "Ufahamu Africa," featuring weekly episodes of news highlights and interviews about life and politics on the African continent.

This even will be held both in person and webcast via Zoom. Registration is required to attend the Zoom webinar at: http://myumi.ch/y9Zwy