IISS Lecture. The “Talisman of the World”: Mawlāna Jalāl al-Dīn Rūmī and the Mongols in 13th-Century Seljuk Anatolia 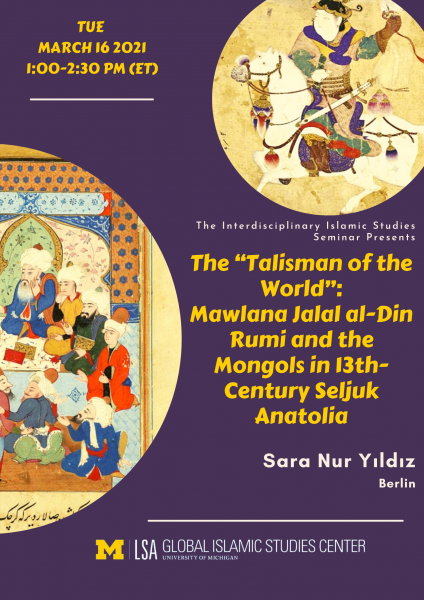 Free and open to the public; please register at https://myumi.ch/K4nNo

Mawlānā Jalāl al-Dīn Rūmī (d. 1274), the Sufi shaykh and poet celebrated for his mystical Mathnawi, rose to prominence during a particularly turbulent period as Mongol rule was imposed upon Seljuk Anatolia. While partisan arguments abound in modern Turkish historiography whether he was a collaborator with the Mongol invaders or not, Mawlana’s social and political role in Mongol-dominated Seljuk Konya remains obscure. By drawing on a variety of thirteenth and fourteenth century sources of a hagiographical, religious and historical nature, Mawlānā’s historical role and socio-political context are reevaluated: How did Mawlānā view the Mongol regime? What was his relationship with the Seljuk political elite and, in particular, with the Parwāna, the Seljuk official and Mongol collaborator who usurped the Seljuk sultan’s power? Finally, how are we to understand Mawlānā’s moral-religious charisma and spiritual capital as the protector of Konya and Rūm from the Mongols-- the great talisman of the world, as his hagiographer Aflākī portrays him?