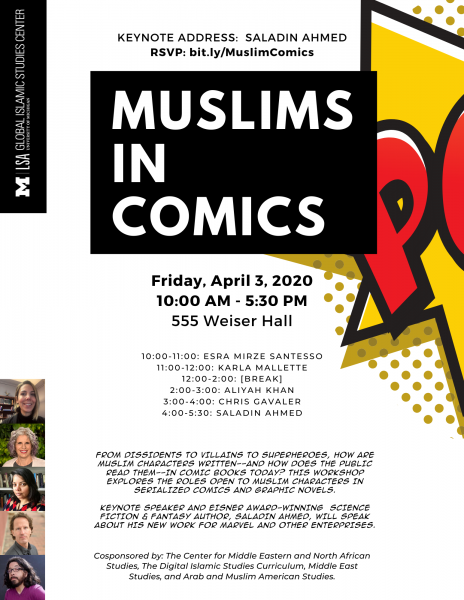 Unfortunately and due to unforeseen circumstances, this event has been cancelled. We will reschedule this event in Fall 2020.

Panelists will include: Esra Mirze Santesso, Chris Gavaler, Aliyah Khan, & Karla Mallette. A keynote address will be given at 4:00 PM by Saladin Ahmed.

This event is free and open to the public but please RSVP: https://forms.gle/MKZ96YSR7JgiYvHn8

From dissidents to villains to superheroes, how are Muslim characters written--and how does the public read them--in comic books today? This workshop explores the roles open to Muslim characters in serialized comics and graphic novels. The medium of serialized comics, commercialized in the twentieth century by mainstream comics publishers such as Marvel and DC, and epitomized by their respective superhero universes, has long been associated with a lack of racial and religious diversity, the sexualization of female characters, and a reader base that is stereotypically young, male, and white. Minority characters were often limited to tokenized villains or sidekicks designed for comic relief. But the contemporary young Muslim female superhero Ms. Marvel symbolizes a comics landscape that is changing. In the contexts of the Gulf Wars, 9/11, the Arab Spring, the Palestinian conflict, ongoing civil unrest in the Middle East, and worldwide refugee migrant crises, writers and artists from the Muslim and Arab worlds, and others writing journalistically and historically about those locales, are at the forefront of graphic medium literary production.

Graphic novels and comics by and about Muslims and Arabs comprise a growing and distinctive narrative strain within comics studies—one that this workshop of comics and Muslim and Arab Studies artists and scholars seeks to investigate.

Chris Gavaler ( On the Origin of Superheroes: From the Big Bang to Action Comics No. 1, 2015) explores the Islamicist history of the 20th-century superhero.

Karla Mallette ( European Modernity and the Arab Mediterranean, 2010) reports on resistance to Muslim and other minority identity politics from some comics readers.

The presenters bring postcolonial, decolonial, comics studies, and historicizing methodologies to bear on understanding commonalities and differences among Islamic, Muslim, and Arab graphic narratives, reading them as transnational works that, as many of their subjects do, cross borders and resist authoritarian states.

---
If you are a person with a disability who requires an accommodation to attend this event, please contact us at islamicstudies@umich.edu, we'd be happy to help. As you may know, some accommodations may require more time for the university to arrange, so please let us know as soon as you can.