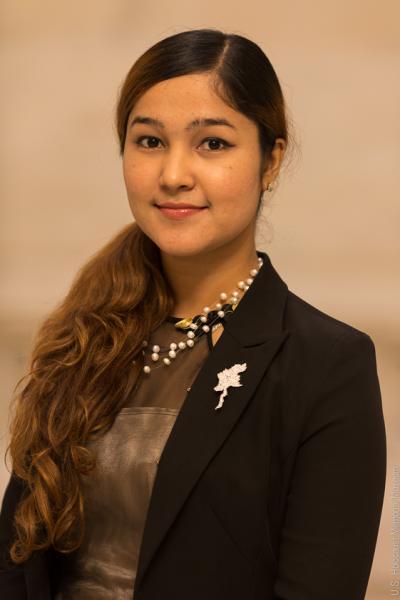 Wai Wai Nu is a former political prisoner and the founder and Executive Director of the Women Peace Network in Myanmar. She spent seven years as a political prisoner in Burma because of her father’s pro-democracy political activism. Since her release from prison in 2012, Nu has dedicated herself to working for democracy and human rights, particularly on behalf of marginalized women and members of her own ethnic group, the minority Rohingya population.

As Executive Director and Founder of Women Peace Network, a platform to build peace and mutual understanding between Myanmar’s different ethnicities, and to empower and advocate for the rights of marginalized women in Arakan and Myanmar; campaigns for women’s rights. She has been working to reduce discrimination and hatred among Buddhist and Muslim communities, building allies and solidarity to improve the human rights of the Rohingya people. Nu has conducted women’s empowerment training, offered legal education seminars, and organized human rights and peacebuilding advocacy, workshops, and forums.

In 2014, Nu co-Founded Justice for Women, a network of women lawyers providing pro-bono legal consultation and education. In 2016, she founded Yangon Youth Center, where young people of diverse backgrounds in Myanmar can explore their ideas, learn civic and political leadership, and build trust and relationships among each other. Nu organized the My Friend Campaign with youth from different communities to promote tolerance and to reduce discrimination among diverse groups. Nu received a law degree from Yangon University in 2014 and graduated with her Master of Laws from the University of California Berkeley in 2018.

This event is co-sponsored by: Center for Southeast Asian Studies and Program in International and Comparative Studies.

If you are a person with a disability who requires an accommodation to attend this event, please reach out to us at umichhumanrights@umich.edu at least 2 weeks in advance of this event. Please be aware that advance notice is necessary as some accommodations may require more time for the university to arrange.
Donia Human Rights Center
500 Church St.
Suite 300
Ann Arbor, MI 48109-1042
umichhumanrights@umich.edu
A member of the International Institute
734.615.8482
734.763.9154
Sitemap
Facebook Twitter Youtube