Film Screening and Discussion of Soufra 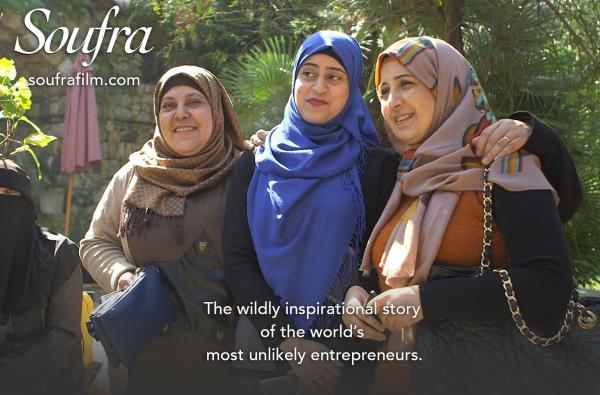 Soufra follows the unlikely and wildly inspirational story of intrepid social entrepreneur, Mariam Shaar – a generational refugee who has spent her entire life in the Burj El Barajneh refugee camp just south of Beirut, Lebanon. The film follows Mariam as she sets out against all odds to change her fate by launching a successful catering company, “Soufra,” and then expand it into a food truck business with a diverse team of fellow refugee woman who now share this camp as their home. Together, they heal the wounds of war through the unifying power of food while taking their future into their own hands through an unrelenting belief in Mariam, and in each other. In the process, Mariam is breaking barriers, pulling together Syrian, Iraqi, Palestinian and Lebanese women to work side by side and form beautiful friendships while running this thriving business.

Soufra will shine a new and revealing light on people inside of the largest refugee crisis in human history, but ultimately this film is about hope, grit, passion and the common bonds created by bringing people together around food as a bridge to overcome all barriers. Though Mariam is officially considered “stateless” she is a beacon of hope and home for thousands upon thousands of women in the most unlikely of places. Mariam and her team will be just that for thousands more once her story is told through Soufra.

The screening of the film will be followed by a discussion and Q&A featuring Soufra director and producer, Thomas Morgan and Quinn Konarska, U-M International Studies alumna and production coordinator, Rebelhouse Group, who helped produce the film.

A reception with light appetizers and refreshments will follow the film discussion. The cookbook, Soufra: Recipes from a Refugee Food Truck, will also be available for purchase for $20.00 via cash or check.

Thomas Morgan
Director and Producer, Soufra
Thomas attended college at Central Michigan University where he graduated with a Bachelors of Science in Business Administration in 1990. Morgan worked as real estate developer and investment banker for most of his career. In 2009, after a “series of unlikely events” Morgan left the corporate world behind to become a documentary filmmaker and activist.

His films have been labeled “Filmanthropy” as he has leveraged them to create movements and a call to action. In Storied Streets, Morgan captures the painful reality of homelessness in America and gracefully unearths pain and personal triumphs of those living unhoused in our country. Through the film he has protested, petitioned and pushed for laws making the violence against the homeless a hate crime, higher wages and abolishment of laws criminalizing homelessness.

With the 2013 documentary short film, Waiting for Mamu, he speaks to the power of one, through the story of Pushpa Basnet, who at age 21 began helping free children from the prison floors in Nepal. The award winning film has raised the money to build a permanent home, The Butterfly Home, in Kathmandu and assisted in supporting their education. He has added Executive Producer to his resume through his support of Silenced, a film about US government whistleblowers, and India’s Daughter, an Oscar contending film about the rape and murder of a 23 year old medical student in India.

Morgan has been a keynote speaker many times on Capitol Hill and twice before the U.S. Congress. He also spoke for the PPL forum at the 2012 Democratic National Convention and at 2013 at the United Nations. His TED Talk entitled “Put On Your Underoos It’s Time To Save The World” has been seen via internet by hundreds of thousands. He has done one of the most unusual TEDx Talks from Nepal soon after the earthquake while providing relief to Pushpa Basnet and her children and was the commencement speaker at his alma mater given what has been called “One the best commencement speeches of 2015.”

Quinn graduated from the University of Michigan in 2013 with a BA in International Studies focused on Global Environment and Health, and minors in Screen Arts and Cultures, and French and Francophone studies. While at Michigan, she was an active member of FOKUS (Fighting Obstacles Knowing Ultimate Success) and SHEI Magazine, and studied abroad in Aix-en-Provence, France. In 2011, she worked for Participant Media as a documentary development intern, helping to fund and produce films for social change. Upon graduation, she accepted an offer with Google in San Francisco. She worked in People Operations, developing events and programs to engage with top tech talent while working to build a more diverse hiring pipeline. In August 2017, Quinn left Google, packed up her Volvo wagon, and headed south to pursue impact media in Los Angeles.

Quinn currently works as a production and outreach coordinator for Rebelhouse Group, a creative agency that produces films in tandem with outreach campaigns to enact social change. Their most recent documentary, Soufra, tells the story of a group of refugee women in Lebanon who set out to launch a successful catering company and expand it into a food truck business. Soufra was an official selection of the Berlin International Film Festival, Cannes Positive Cinema Week, DOC NYC, El Gouna, and numerous other film festivals. Quinn plans to continue pursuing writing and filmmaking as tools to make the world a better place.

If you are a person with a disability who requires an accommodation to attend this event, please reach out to us at least 2 weeks in advance of this event. Please be aware that advance notice is necessary as some accommodations may require more time for the university to arrange. Please contact: is-michigan@umich.edu.
Donia Human Rights Center
500 Church St.
Suite 300
Ann Arbor, MI 48109-1042
umichhumanrights@umich.edu
A member of the International Institute
734.615.8482
734.763.9154
Sitemap
Facebook Twitter Youtube