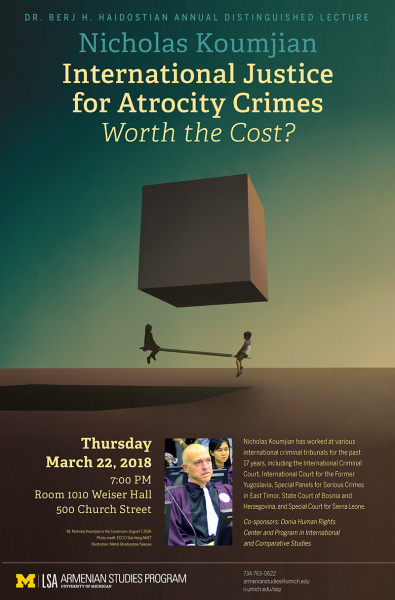 If you are unable to attend in person, this lecture will be streamed live on our website: https://ii.umich.edu/asp/news-events/all-events/haidostian-annual-lectures/2018-dr--berj-h--haidostian-annual-distinguished-lecture.html

Since the establishment of the International Criminal Tribunal for the Former Yugoslavia in 1993, several efforts have been made around the globe to bring to justice political and military leaders responsible for war crimes, crimes against humanity and genocide. Several different models of international tribunals were established for Rwanda, Sierra Leone, Cambodia and Lebanon. In 2002, the International Criminal Court began operations. Critics have labelled these efforts as too slow, too expensive and a hindrance to peace efforts. Have these international courts had any effect on the commission of atrocities in times of conflict? Do they serve the interests of victims or contribute in any way to post-conflict transitions? Mr. Koumjian will talk about the future prospects for international criminal law, and whether or not there will ever be a justice mechanism for atrocity crimes ongoing today in places like Syria, Yemen and Myanmar.

Nicholas Koumjian has worked at various international criminal tribunals for the past 17 years, including the International Criminal Court, International Court for the Former Yugoslavia, Special Panels for Serious Crimes in East Timor, State Court of Bosnia and Herzegovina, and Special Court for Sierra Leone. From 2007-2012, Mr. Koumjian was Senior Trial Attorney for the prosecution of Charles Taylor, former President of Liberia for crimes in Sierra Leone. Following his appointment by the United Nations Secretary General, he has served in Cambodia as the International Co-Prosecutor at the Khmer Rouge Tribunal. In June 2017, he completed final arguments in the trial of Nuon Chea, “Brother Number 2” in the Khmer Rouge regime and Khieu Samphan, the former Head of State on charges for crimes committed by that regime between 1975-1979. It is estimated that almost 2 million people lost their lives during that regime and the charges include genocide, enslavement, forced marriage and rape.