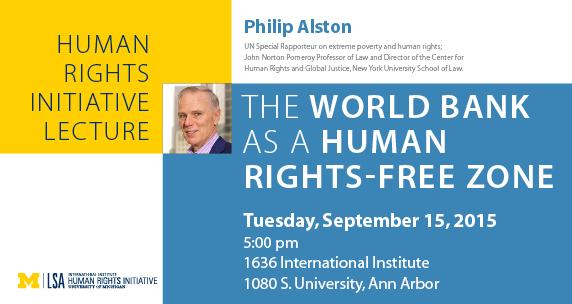 Born and educated in Australia (Law and Economics) and with a doctorate from the University of California, he is an international law scholar and human rights practitioner. He is John Norton Pomeroy Professor of Law at New York University School of Law and has previously taught at various law schools around the world, including the Fletcher School of Law and Diplomacy, Harvard Law School, Australian National University, and the European University Institute.

Professor Alston has also served the United Nations in various capacities since the 1980s. He was the first Rapporteur of the U.N. Committee on Economic, Social, and Cultural Rights from 1987 until 1990, and then chaired the Committee for eight years until the end of 1998. During this period, he played a central role in efforts to reform and streamline the U.N. treaty body system and, as an Independent Expert appointed by the U.N. Secretary-General, he reported to the General Assembly on measures to ensure the long-term effectiveness of the U.N. human rights treaty bodies (reports in 1989, 1993 and 1997). Between 2002 and 2007, he served as Special Adviser to the U.N. High Commissioner for Human Rights on the Millennium Development Goals, and between 2004 and 2010, as Special Rapporteur on Extrajudicial, Summary or Arbitrary Executions. He was also Unicef’s legal adviser throughout the process of drafting the Convention on the Rights of the Child."
Donia Human Rights Center
500 Church St.
Suite 300
Ann Arbor, MI 48109-1042
umichhumanrights@umich.edu
A member of the International Institute
734.615.8482
734.763.9154
Sitemap
Facebook Twitter Youtube