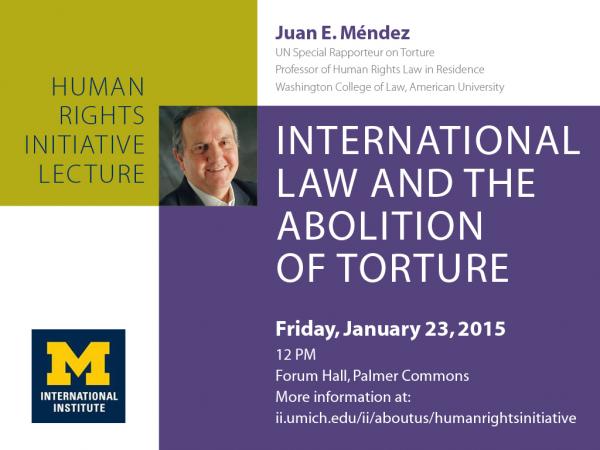 International law has developed a remarkably complete normative framework designed to prevent and to punish torture as an international crime, as well as some mechanisms to implement obligations that, unfortunately, are not regularly observed in practice. In addition to the absolute and non-derogable prohibition on torture as well as on cruel, inhuman or degrading treatment or punishment, international law imposes an obligation on all States to investigate, prosecute and punish each act of torture or ill-treatment, to reveal the truth about such practices, to exclude evidence obtained under torture from any proceedings against the victim, and to offer reparations and rehabilitation. This lecture will highlight some challenges that experience presents to the effective realization of these important standards.

Juan E. Méndez is Professor of Human Rights Law in Residence at the American University-Washington College of Law and the UN Special Rapporteur on Torture and Other Cruel, Inhuman and Degrading Treatment or Punishment since November 2010.

He is the author – with Marjorie Wentworth – of Taking a Stand (New York: Palgrave-MacMillan, October 2011). He has been an advisor on crime prevention to the Prosecutor, International Criminal Court. In 2010 and 2011 he was also Co-Chair of the Human Rights Institute of the International Bar Association.

Until May 2009 he was the President of the International Center for Transitional Justice (ICTJ) and Scholar-in-Residence at the Ford Foundation in New York (summer 2009). Concurrent with his duties at ICTJ, he was Kofi Annan’s Special Advisor on the Prevention of Genocide (2004 to 2007). Between 2000 and 2003 he was a member of the Inter-American Commission on Human Rights of the Organization of American States, and served as its President in 2002.