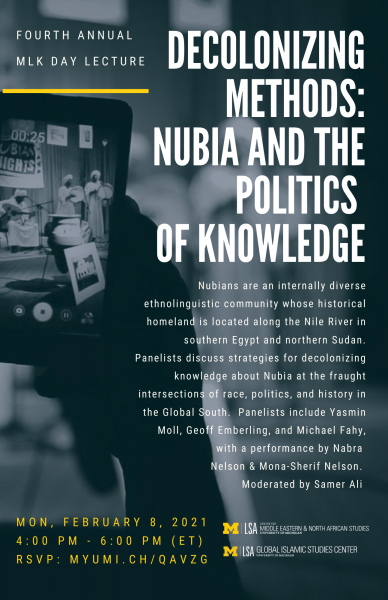 Nubians are an internally diverse ethnolinguistic community whose historical homeland is located along the Nile River in southern Egypt and northern Sudan.

Panelists discuss strategies for decolonizing knowledge about Nubia at the fraught intersections of race, politics, and history in the Global South.

Panelists include Yasmin Moll, Geoff Emberling, and Michael Fahy, with a performance by Nabra Nelson & Mona-Sherif Nelson. The discussion will be moderated by Samer Ali.

Yasmin Moll (Assistant Professor of Anthropology) is an anthropologist of the Middle East and North Africa. She has been conducting ethnographic fieldwork on Nubian cultural activism in Egypt since 2015. Yasmin’s maternal family is from Kushtmna Sharq, Nubia.

Geoff Emberling (Associate Research Scientist, Kelsey Museum) is an archaeologist and museum curator. He and his team have been working on Nubian archaeological sites in northern Sudan since 2013.

Michael Fahy (Lecturer, School of Education) did his PhD in Anthropology at the University of Michigan on higher education in Morocco. He conducts a range of innovative courses and educational outreach programs that enhance understanding across cultures

Nabra Nelson (Theater Artist and Director of the Nubian Foundation for Preserving a Cultural Heritage), is a theatre creator and community organizer from Nubia, Egypt, and California.