CMENAS Colloquium Series. The Revolution Within: Islamic Media and the Struggle for the “New Egypt” 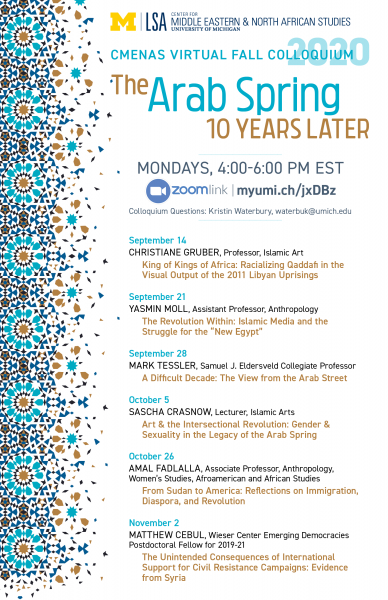 About the Presentation:
The 2011 revolution unleashed passionate public concern about how to create a “New Egypt.” Islamic channels were important sites of these debates as rival television preachers gave media form to their competing visions of what a virtuous life entails and what an ethical polity looks like. Based on fieldwork in Cairo with the “New Preachers” – so named because of their novel styles of Islamic media – this talk explores what these on and off-screen struggles reveal about Islam’s competing theologies and the distinctive media forms they take. It also considers what methodological attunements such contested religious mediations demand of their ethnographers.


About the Speaker:
Yasmin Moll is an assistant professor in the department of anthropology. She is writing a book about new forms of Islamic media and the religious contention they provoke against the backdrop of Egypt’s 2011 revolution. Her fieldwork was supported by numerous national grants, including from the Social Science Research Council, the National Science Foundation and the Fulbright Commission. Her publications include articles in Cultural Anthropology, Public Culture, and Middle East Report, among others. She is also a documentary filmmaker and a former member of the Michigan Society of Fellows.

If there is anything we can do to make this event accessible to you, please contact us. Please be aware that advance notice is necessary as some accommodations may require more time for the university to arrange. Contact: Kristin Waterbury at waterbuk@umich.edu
Center for Middle Eastern and North African Studies
500 Church Street
Suite 500
Ann Arbor, MI 48109-1042
cmenas@umich.edu
A member of the International Institute
734.647.4143
734.763.4765
Sitemap
Facebook Twitter Youtube