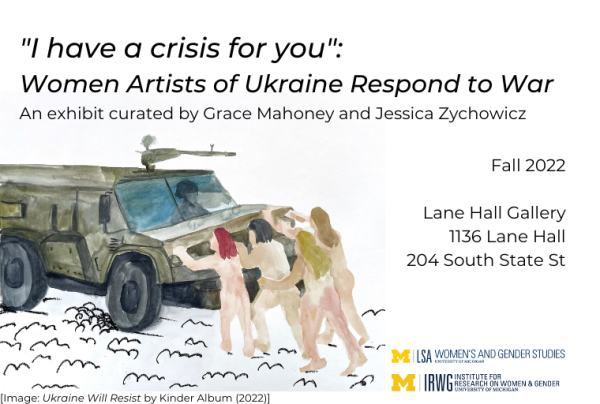 About the exhibit:
In February 2022, the world witnessed the invasion of Ukraine and all-out war of aggression by the Russian Federation. Since this time, massive casualties, human rights violations, and an unprecedented refugee crisis have ensued. Women artists of Ukraine have responded. They paint on found materials in refugee housing, illustrate in bomb shelters, photograph their shelled cities wearing press passes and bulletproof jackets. They document, create, and share. They post their daily journals and images on social media. They perform at the Grammy Awards. They know their message is powerful, and the amplification of their voices is critical for victory in a very real battle for survival.

The featured artists have also been selected because of their prominent interest and exploration of issues relating to gender in their works. The title for this exhibit comes from a poem of the same name by Lyuba Yakimchuk:

“— our love’s gone missing, I explain to a friend/ it vanished in one of the wars/ we waged in our kitchen/ — change the word ‘war’ to ‘crisis,’ he suggests/ because a crisis is something everyone has from time to time.”

The exhibit will be accompanied by a companion website which includes an expanded set of informational and aid-related resources.

"'I have a crisis for you': Women Artists of Ukraine Respond to War" is hosted by the University of Michigan’s Institute for Research on Women and Gender (IRWG) and the Department of Women’s and Gender Studies with co-sponsorship from the Center for Russian, East European & Eurasian Studies, the Department of Slavic Languages and Literatures, the Museum Studies Program, the Weiser Center for Europe and Eurasia, and the Weiser Center for Emerging Democracies.