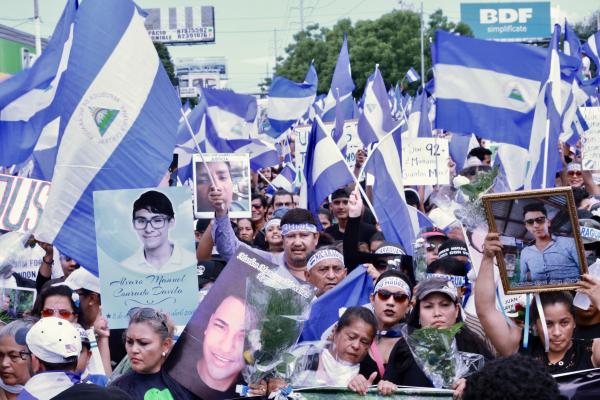 From the deadly suppression of nationwide protests in 2018 to the recent incarceration of dozens of political leaders, journalists, and human rights advocates, including seven presidential hopefuls, the Ortega regime in Nicaragua has consolidated an authoritarian dictatorship dependent on the use of force to sustain itself in power. In light of these events, scholars and Nicaraguan activists share their observations and insights on the political and social developments in Nicaragua.

Luciana Chamorro is a political anthropologist who specializes in Central America and writes on revolution and its afterlives, populist politics, authoritarianism, affect and aesthetics. She is currently preparing a book manuscript titled “Afterlives of Revolution: Authoritarian Populism and Political Passions in Post-Revolutionary Nicaragua,” which examines populist governance and affective attachments to the Sandinista political project after the return of Daniel Ortega to power in 2007. Luciana received her PhD in Anthropology from Columbia University in 2020 and was a Mellon Postdoctoral Research Associate for the “Neoliberalism at the Neopopulist Crossroads” Sawyer Seminar at the University of Arizona for the 2020-2021 academic year.

Jennifer Goett is a cultural anthropologist, specializing in political and feminist anthropology. She has published work on Indigenous and Afrodescendant social movements in Central America, particularly Nicaragua, and on state violence, racialized policing, land dispossession, and infrastructure megaprojects. Goett is the author of Black Autonomy: Race, Gender, and Afro-Nicaraguan Activism (Stanford 2017). Her current research focuses on Nicaraguan asylum seekers in Costa Rica and the United States. In addition to her scholarship, she publishes editorials on Central American politics and works as a pro bono expert witness for asylum cases in U.S. immigration court.

Kai M. Thaler works on conflict and security, authoritarianism and democratization, and protest and repression, focused on Latin America and Africa. His research and commentary on Nicaraguan politics has been published in Comparative Politics and the Journal of Democracy and in public venues including Foreign Policy, Latinoamérica 21, the Los Angeles Times, and the Washington Post.

Emilia Yang is an artist, organizer, and scholar. Her art practice utilizes digital media, archives, film, games, performance, and urban interventions for the creation of transnational and speculative feminist media, and transformative justice projects. Her more recent project, “AMA y No Olvida, Memory Museum Against Impunity” ( http://www.museodelamemorianicaragua.org/) is a transmedia memory museum that explores participatory forms of mediation for remembering victims of state violence in her home country Nicaragua. Emilia’s theory-practice work has been published in Popular Culture and the Civic Imagination: Case Studies of Creative Social Change (NYU Press, 2020); Ada: A Journal of Gender, New Media, and Technology; and The Additivist Cookbook (Institute of Network Cultures, 2015).

This hybrid event will be presented in person at 1010 Weiser Hall and via Zoom. Register for the live-stream at https://myumi.ch/kxOxd