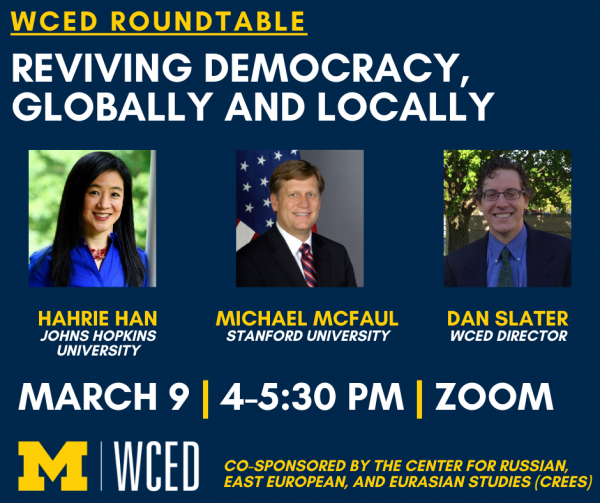 How do we revitalize democracy, both globally and locally? And are there any common threads linking the two?

Hahrie Han is the inaugural director of the SNF Agora Institute, the Stavros Niarchos Foundation Professor of Political Science, and faculty director of the P3 Research Lab at Johns Hopkins University. She specializes in the study of organizing, movements, civic engagement, and democracy. Her newest book will be published by the University of Chicago Press in January 2021, entitled Prisms of the People: Power and Organizing in 21st Century America. She has previously published three books: How Organizations Develop Activists: Civic Associations and Leadership in the 21st Century; Groundbreakers: How Obama's 2.2 Million Volunteers Transformed Campaigning in America; and Moved to Action: Motivation, Participation, and Inequality in American Politics. Her award-winning work has been published in the American Political Science Review, American Sociological Review, American Journal of Sociology, Journal of the American Medical Association (JAMA), and numerous other outlets, including the New York Times, Washington Post, and elsewhere.

Michael McFaul is the Ken Olivier and Angela Nomellini Professor of International Studies in Political Science, director and senior fellow at the Freeman Spogli Institute for International Studies, and the Peter and Helen Bing Senior Fellow at the Hoover Institution, all at Stanford University. He was also the Distinguished Mingde Faculty Fellow at the Stanford Center at Peking University from June to August of 2015. He joined the Stanford faculty in 1995. He is also an analyst for NBC News and a contributing columnist to The Washington Post. McFaul served for five years in the Obama administration, first as Special Assistant to the President and Senior Director for Russian and Eurasian Affairs at the National Security Council at the White House (2009-12), and then as U.S. Ambassador to the Russian Federation (2012-14). He has authored several books, most recently the New York Times bestseller, From Cold War to Hot Peace: An American Ambassador in Putin’s Russia. Earlier books include Advancing Democracy Abroad: Why We Should, How We Can; Transitions To Democracy: A Comparative Perspective (eds. with Kathryn Stoner); Power and Purpose: American Policy toward Russia after the Cold War (with James Goldgeier); and Russia’s Unfinished Revolution: Political Change from Gorbachev to Putin. His current research interests include American foreign policy; great power relations between China, Russia, and the United States; and the relationship between democracy and development.

Registration for this Zoom webinar is required at https://myumi.ch/O4yPQ