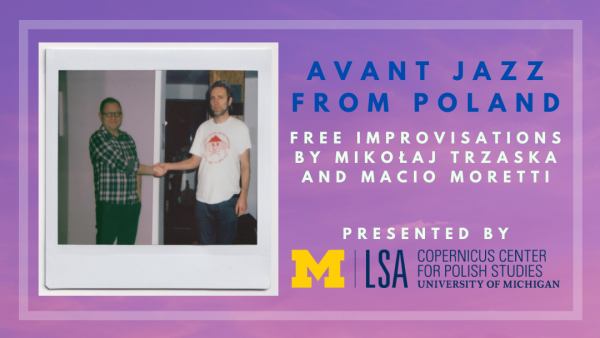 The Copernicus Center for Polish Studies presents a concert streamed from Warsaw featuring two of the finest innovative progressive musicians in Poland, which has become one of the most important centers of jazz in Europe. This concert was organized to illustrate the lecture by Maciej Lewenstein on “Free Improvisation and Jazz Avant-Garde in Poland: From Tomasz Stańko to Mikołaj Trzaska,” that will be broadcast on Thursday, February 18, 2021 at 12 PM. Trzaska first performed in Ann Arbor in 2010 in a duet with the magnificent trombonist Steve Swell at the Kerrytown Concert House, and returned in 2013 as the leader of Shofar, a trio that reinvents traditional Jewish music though free improvisation.

Mikołaj Trzaska—saxophonist, bass clarinetist, and film score composer—grew out of yass, a socio-artistic movement that brazenly challenged the rigidity of the institutionalized mainstream Polish jazz environment during the 1980s and 1990s. Free from any specific doctrine and open to all forms of artistic expression, the musicians successfully impacted the jazz scene in the country. Trzaska was the co-founder of the most important yass group—the celebrated Miłość ensemble that lasted, off and on, from 1988 to 2002, and the of the equally creative Łoskot, founded in 1993. Although the impetus of yass faded away many years ago, Trzaska's status remained and he went on to become one of the main leaders of the Polish scene, working as well with the top tier of international improvisors. After the yass period, he recorded a few concentrated quieter albums with the renowned Oleś brothers bass/drum duo. Trzaska has accompanied poets such as Marcin Świetlicki and Jurii Andrukhovych, and created musical-literary projects with the renowned Polish writer/journalist/critic Andrzej Stasiuk. Today, he works with many groups, including his own international trio Volumen, Ken Vandermark’s Resonance Ensemble, Magic with Joe McPhee, and the unique trio Shofar with Raphael Rogiński and Macio Moretti, which explores unique new improvisational perspectives on traditional Jewish music. He has also established himself as a major award-winning film music composer, working with the director Wojciech Smarzowski. But his main focus of self-realization is grounded in radical free jazz: he travels the world cooperating with some of the world’s major improvisors such as Peter Brötzmann, Joe McPhee, and Ken Vandermark.

Macio Moretti is a drummer and bassist (and occasionally a poor singer and even poorer guitar player) who works in many genres, from avant metal to jazz. He has founded or co-founded so many musical groups and organizations that it is practically impossible to count them, but bands such as Mitch & Mitch and LXMP, as well as the recording label Lado ABC, might be the most important of them. With these aforementioned bands he has had the pleasure of recording and releasing records with major artists such as Kazuhisa Uchihashi, Felix Kubin, Clayton Thomas, Kassin, and Zbigniew Wodecki. Besides all this, he is also an award-winning graphic designer, the father of two, a bread maniac, and has absolutely no interest in motorization.

This concert is presented in partnership with the Michigan Theater, and registration is available at https://www.michtheater.org/avant-jazz-poland/

If there is anything we can do to make this event accessible to you, please contact us at weisercenter@umich.edu. Please be aware that advance notice is necessary as some accommodations may require more time for the university to arrange.
Copernicus Center for Polish Studies
500 Church Street
Weiser Hall, Suite 500
Ann Arbor, MI 48109-1042
copernicus@umich.edu
A member of the International Institute
734.764.0351
734.763.4765
Sitemap
Facebook Youtube