PICS Career Event. Careers and Internships with the U.S. Department of State 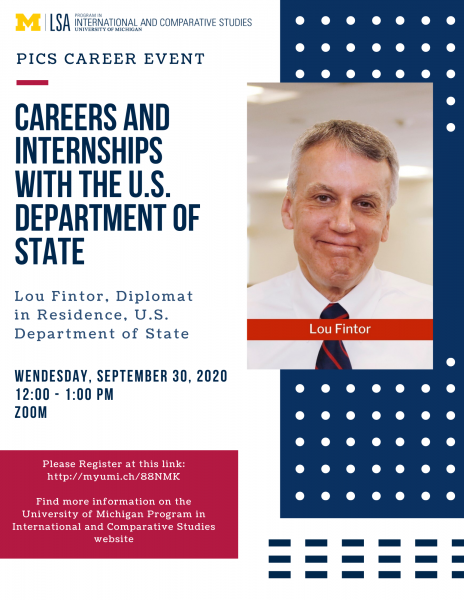 Lou Fintor, Diplomat in Residence, will discuss federal career opportunities and internships within the U.S. Department of State Department and Foreign Service.

The U.S. Department of State offers over 1,000 summer internships and hosts a variety of career paths at its embassies and missions throughout the world, at its headquarters in Washington, D.C., and at facilities in approximately 20 other cities throughout the United States. Join us to learn more about opportunities with the U.S. Department of State!

Please note: This session will be held virtually EST through Zoom. This webinar is free and open to International Studies students, but registration is required. Once you've registered the joining information will be sent to your email.

If there is anything we can do to make this event accessible to you, please contact us at is-michigan@umich.edu. Please be aware that advance notice is necessary as some accommodations may require more time for the university to arrange.