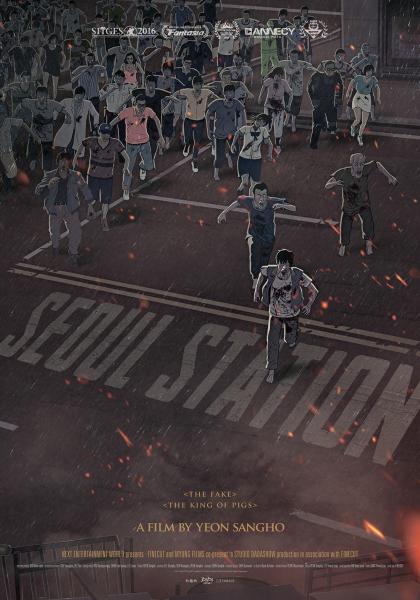 Seoul Station is an animated film by Yeon Sang-ho one of South Korea’s brightest new filmmakers. His award-winning and record-breaking Train to Busan, which was a selection at this year’s Cannes Film Festival, is actually a live-action continuation of the story he created for Seoul Station. Variety said of Train to Busan it… “pulses with relentless locomotive momentum. As an allegory of class rebellion and moral polarization, it proves just as biting as Bong Joon-ho’s sci-fi dystopia “Snowpiercer,” while delivering even more unpretentious fun.”

The action takes place in downtown Seoul, where a zombie pandemic is unleashed from a homeless encampment that exists inside the city’s central train station. The Playlist added, “The centrality of such marginalized, hopeless figures, all dismissed by social services at some point over the feature’s runtime and later quarantined by the military, resonates with the concerns of left-wing protests in Seoul late last year.”