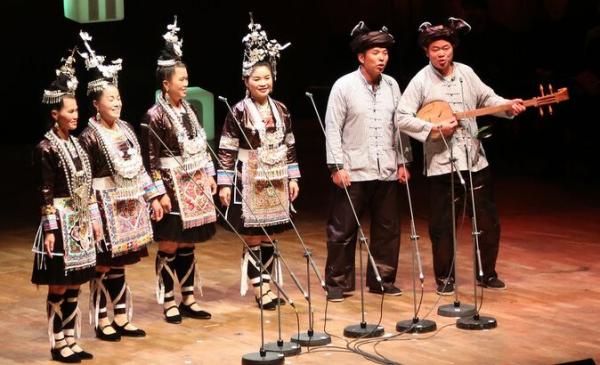 Center for World Performance Studies and Lieberthal-Rogel Center for Chinese Studies present the Yandong Grand Singers at the Lydia Mendelssohn Theatre on September 24, 2019 at 7:30pm. In bright voices and natural harmonies shaped by the unique environment of the area, the Dong people of Guizhou, China sing about nature, romantic love, history and moral values. For the Dong people, Grand Song is an indispensable part of life, just as their saying goes, “rice feeds the body–but songs feed the soul”. The Dong people transmit much of their history, culture and knowledge through songs that accompany them throughout their lives. Choirs of children, young and senior people are formed in every village, representing a crucial symbol of Dong ethnic identity and cultural heritage.

The Yandong Grand Singers is a choir formed by farmers from Yandong Village, specializing in the “Grand Song” of the Dong people - polyphonic music known to the world only in recent decades. The repertoire includes a range of genres such as ballads, children’s songs, songs of greeting and imitative songs that test performers’ virtuosity at mimicking the sounds of animals. Taught by masters to choirs of disciples, Grand Songs are performed formally in the drum-tower, the landmark venue for rituals, entertainment and meetings in a Dong village, or more spontaneously in homes or public places. In 2009, the Dong musical tradition was listed by UNESCO as an intangible cultural heritage in China. This will mark the group’s first full US tour, having previously appeared at Carnegie Hall China Festival and the International International Festival for Vocal Music in Leipzig, Germany.

CWPS events are free and open to the public. Visit www.lsa.umich.edu/world-performance for more info. If you are a person with a disability who requires an accommodation to participate in this event, please contact the Center for World Performance Studies, at 734-936-2777, at least one week in advance of this event. Please be aware that advance notice is necessary as some accommodations may require more time for the University to arrange.