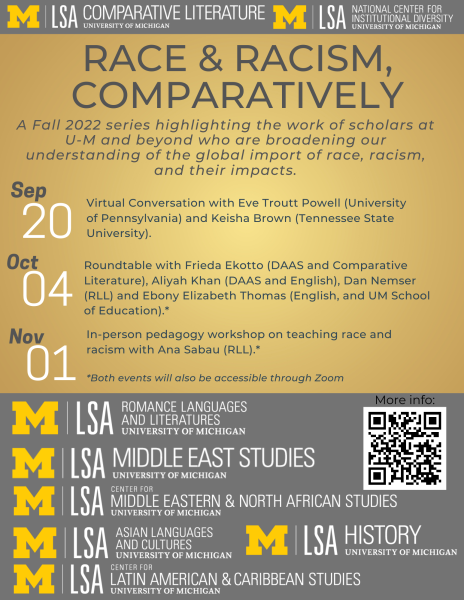 “Race and Racism, Comparatively” is a series of three conversations highlighting the work of scholars both in and beyond U-M whose scholarship is contributing to much-needed conversations on the global dimension of race, racism, and their impacts. Through these events, we seek to help broaden the aperture through which the academic community considers these themes, encouraging an understanding of a dynamic and interconnected set of systems, practices and material effects.

September 20th 2022 @ 4:00 PM: Virtual conversation with University of Pennsylvania scholar and president of the Middle East Studies Association, Eve Troutt Powell and Tennessee State University scholar, Keisha Brown. A cultural historian, Professor Troutt Powell’s scholarship has focused the history of the modern Middle East with a particular emphasis on slavery in the Nile Valley and in the former Ottoman Empire. Professor Brown’s work has focused on modern China and the negotiation of Sino-Blackness; her research interests broadly include ethnic and race studies, postcolonial theory and social and cultural history in East Asia.
Register here:
https://umich.zoom.us/webinar/register/WN_ce6GMDBUSPyNH94U9LQBDg

October 4th 2022 @ 4:00 PM: Roundtable featuring U-M faculty whose scholarship takes up the question of race and racism according to a transnational lens. The areas of focus represented among the participants include: the construction of blackness in the Francophone world; race, gender and Islam; the role of race and racialization as a tool of biopower in Mexico; and race and representation in US classrooms, literature and media. This event will be in-person (conditions permitting) with a hybrid stream option.

November 1st 2022 @ 4:00 PM: Pedagogy Workshop. The groups will function as both an opportunity to reflect on the provocations raised during previous two events, dissect our assumptions about race on the global stage, and exchange ideas and best practices for teaching the same. The aim is to create a constructive and productive dialogue which will ideally produce a series of “best practices'' for teaching race and racism from a comparative, global standpoint. This event will be in-person (conditions permitting) with a hybrid stream option on Zoom.