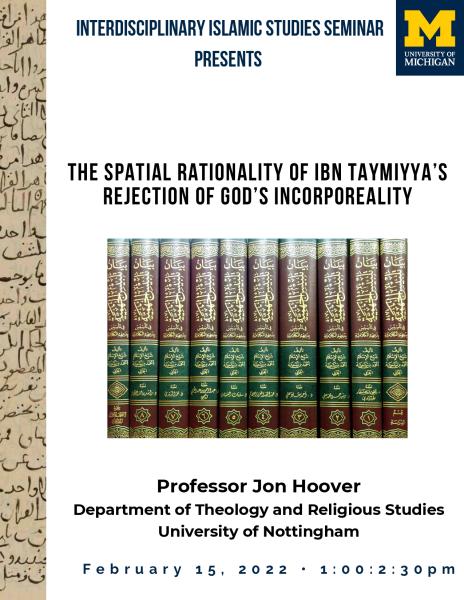 The IISS is pleased to announce a new lecture with Professor Jon Hoover. In his lecture, Prof. Hoover will discuss the theological views of well-known and controversial Muslim thinker Ibn Taymiyya (d. 728/1328).

Ibn Taymiyya’s (d. 728/1328) well known Hamawiyya fatwa, a refutation of Ash‘ari interpretations of God’s attributes, led to accusations of corporealism (tajsim) in 1298 and then his trials and imprisonment under the Mamluk authorities in 1306. The Ash‘arism of the time denied the plain sense of texts indicating anthropomorphic features of God like sitting on the Throne, and then either ceased thinking about them (tafwid) or reinterpreted them metaphorically (ta’wil). In his Hamawiyya fatwa, Ibn Taymiyya criticizes this Ash‘ari hermeneutic for stripping God of his attributes, and he identifies the Ta’sis al-taqdis of Ash‘ari theologian Fakhr al-Din al-Razi (d. 606/1210) as a prominent book expounding erroneous reinterpretations. Ibn Taymiyya adds that he has proofs from both reason and scripture for his views but that a fatwa is not the place to present them. Ibn Taymiyya eventually provides his proofs from reason in his massive Bayan talbis al-Jahmiyya written in 1306 or 1307. In Bayan Ibn Taymiyya refutes al-Razi’s arguments in Ta’sis al-Taqdis that God is not corporeal or spatially extended, as well as al-Razi’s reinterpretations of anthropomorphic texts in the Qur’an and the Sunna. This paper will examine Ibn Taymiyya’s key rational arguments against al-Razi in Bayan and explore how Ibn Taymiyya reconceptualizes God’s spatial relation to the world by drawing on Ibn Rushd’s Aristotelian notion of place as the inner surface of the containing body. This will show that Ibn Taymiyya envisions God as a very large indivisible and spatially extended being surrounding the universe.