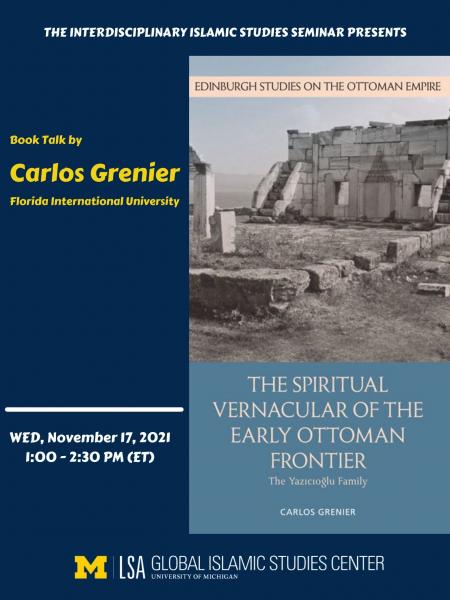 This study follows the lives and ideas of the Yazıcıoğlu brothers Mehmed Yazıcıoğlu and Ahmed Bican, Sufis of the frontier city of Gelibolu and authors of the most popular religious writings in Ottoman Turkish. The book explores early Ottoman popular piety through the lens of the Yazıcıoğlu brothers. This is the first book-length study in English on the Yazıcıoğlu brothers, among the most popular vernacular religious writers and thinkers of the early Ottoman period. It also reconstructs the Yazıcıoğlus’ biographies, assesses the heritage of their language and ideas and analyses the ways these were adapted to their distinct setting. The book furthermore argues that Ottoman popular orthodoxy emerged as a synthesis of a cosmopolitan Islamic canon to address the needs of Turcophone Muslims of the Ottoman lands. It is a contribution to the study of non-elite intellectual life of Ottoman Muslims at the dawn of an imperial age.

Carlos Grenier is a Postdoctoral Fellow in the Department of Religious Studies at Florida International University. He recently earned his doctorate in History at the University of Chicago. His research focuses on religion and politics in the late medieval and early modern Islamic worlds. At FIU, he currently teaches on Islam and other Abrahamic religions. He recently published a number of articles on Ottoman Islam in journals such as Turcica and Archivum Ottomanicum. He is preparing future projects on Sufism and statecraft, and on sacred-historical narratives in the fifteenth and sixteenth-century Islamic lands.