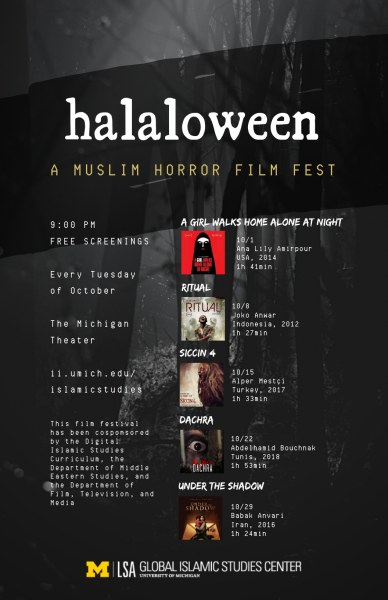 On October 22nd, 2019, Dachra will be the fourth film from our Muslim Horror Film Festival: Halaloween.

This film festival aims to explore a couple of questions: What scares Muslim audiences? How do horror movies conceived for a Muslim public transform the familiar tropes that Hollywood and Hammer horror taught us? How do Muslim directors of horror movies use the genre to ask probing questions about gender and family tensions, social injustice and political oppression, demographic change and social unrest? Are horror movies halal (permissible in Islamic law)? Why so many jinn - and where are the Muslim zombies?

Join us at 9:00 PM at the Michigan Theater on October 22nd, and every Tuesday of October for a free screening of a Muslim horror film. All Screenings are free, open to the public, and will include English subtitles. Screenings are first come-first served. For more information on our festival, why we're running it, and the other films we are screening, please visit: ii.umich.edu/islamicstudies/news-events/events/films.html

October 22: Dachra (dir. Abdelhamid Bouchnak; Tunisia, 2018): The Blair Witch Project meets The Texas Chainsaw Massacre, seasoned with a dash of political satire. College students seek out a legendary lost village while filming a documentary for a class project. Jump scares, cannibalism, an ageless creature in red who might be a nod to Don’t Look Now, and man’s inhumanity to man - along with a mysterious, much-discussed ending. In Arabic and French with English subtitles.