Conversion and Narrative: Reading and Religious Authority in Medieval Polemic 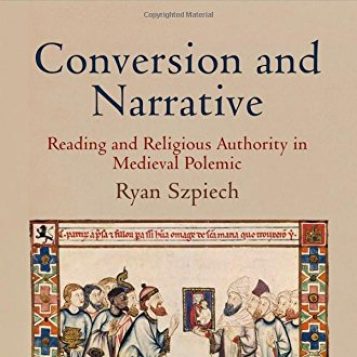 In 1322, a Jewish doctor named Abner entered a synagogue in the Castilian city of Burgos and began to weep in prayer. Falling asleep, he dreamed of a "great man" who urged him to awaken from his slumber. Shortly thereafter, he converted to Christianity and wrote a number of works attacking his old faith. Abner tells the story in fantastic detail in the opening to his Hebrew-language but anti-Jewish polemical treatise, Teacher of Righteousness.
In the religiously plural context of the medieval Western Mediterranean, religious conversion played an important role as a marker of social boundaries and individual identity. The writers of medieval religious polemics such as Teacher of Righteousness often began by giving a brief, first-person account of the rejection of their old faith and their embrace of the new. In such accounts, Ryan Szpiech argues, the narrative form plays an important role in dramatizing the transition from infidelity to faith.
Szpiech draws on a wide body of sources from Christian, Jewish, and Muslim polemics to investigate the place of narrative in the representation of conversion. Making a firm distinction between stories told about conversion and the experience of religious change, his book is not a history of conversion itself but a comparative study of how and why it was presented in narrative form within the context of religious disputation. He argues that between the twelfth and fifteenth centuries, conversion narratives were needed to represent communal notions of history and authority in allegorical, dramatic terms. After considering the late antique paradigms on which medieval Christian conversion narratives were based, Szpiech juxtaposes Christian stories with contemporary accounts of conversion to Islam and Judaism. He emphasizes that polemical conflict between Abrahamic religions in the medieval Mediterranean centered on competing visions of history and salvation. By seeing conversion not as an individual experience but as a public narrative, Conversion and Narrative provides a new, interdisciplinary perspective on medieval writing about religious disputes.