I am currently an associate professor in the U-M Department of Near Eastern Studies. Before arriving at the University of Michigan, I taught at the University of Texas at Austin (UT Austin) and at The Free University in Berlin. While at UT Austin, I served as graduate advisor in Middle Eastern Studies where I raised $500,000 to fund the education and research of the 42 graduate students I recruited. Among those students, 12 met UT Austin’s diversity criteria, meaning women and minorities burgeoned in the department from zero to 29% over four years. I am particularly dedicated to mentoring women, minorities, and first generation graduate students.

In my scholarship, I am often boggled: What seems like cultural understanding amounts to misunderstanding? As George Bernard Shaw notes, “The single biggest problem in communication is the illusion that it has taken place.” I’m interested in documenting these breakdowns and positing alternative approaches. I have published two volumes, co-edited The CALICO Journal: Special Issue on Hebrew and Arabic and authored Arabic Literary Salons in the Islamic Middle Ages: Poets, Public Performance and the Presentation of the Past, which is the only Anglophone study of Arabic salons in medieval Islamic culture. The book introduces performance theory to classical Arabic studies, illustrating how people enjoyed literature in their everyday lives, while forming friendship, falling in love, venerating the holy, and having fun. In doing so, they adjusted the tradition in each setting, thus invigorating the literary canon.

My favorite morphemes are “trans,” “inter,” and “intra.” My thinking typically works across, between, and within buckets simultaneously. So, I tend to agree with the European Enlightenment’s critics, going back to the Spinoza, and Kierkegaard, and those who build on them, like Nietzsche, Max Weber, Ludwig Wittgenstein, Jürgen Habermas, and Richard Rorty. In short, I think that culture is more paradoxical than our modernist theories admit. Embracing paradox is the first step in scaffolding toward inter-cultural understanding. This approach informs my Salons book, and my next project on the poet Mutanabbi (10th cent.) and the question of scapegoating in Arabo-Islamic humanism (adab).

Arabic Literary Salons in the Islamic Middle Ages: Poetry, Public Performance, and the Presentation of the Past  (University of Notre Dame Press) 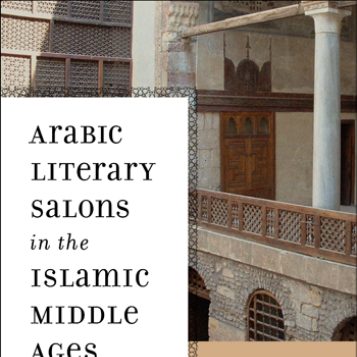 Arabic literary salons emerged in ninth-century Iraq and, by the tenth, were flourishing in Baghdad and other urban centers. In an age before broadcast media and classroom education, salons were the primary source of entertainment and escape for middle and upper ranking members of society, serving also as a space and means for educating the young. Although salons relied on a culture of oral performance from memory, scholars of Arabic literature have focused almost exclusively on the written dimensions of the tradition.

That emphasis, argues Samer Ali, has neglected the interplay of oral...