The Stains of Culture: An Ethno-Reading of Karaite Jewish Women, Raphael Patai Series in Jewish Folklore and Anthropology 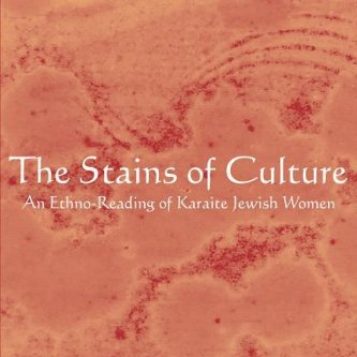 A minority within Judaism, the Karaites are known as a 'reading community'-one that looks to the Bible as the authority in all areas of life, including intimate relations and hygiene. Here Ruth Tsoffar considers how Egyptian Kariates of the San Francisco Bay Area define themselves, within both California culture and Judaism, in terms of the Bible and its bearing on their bodies. Women's perspectives play a large role in this ethnography; it is their bodies that are especially regulated by rules of cleanliness and purity to the point where their biological cycles-menstruation, procreation, childbirth, lactation-determine their place in the community.

As Tsoffar notes, the female body itself becomes a richly encoded text that reveals much about the Karaites' attitudes toward the interrelated issues of gender, sex, food, procreation, sacred traditions, time and space, as well as identity. The author illuminates the cultural strategies used by Karaite women to sustain their religious ideologies yet find personally meaningful ways of reading. The Karaites have survived since at least the 8th century by continually contemporizing their culture. Through a study of the rich, animated ritual experience of niddah (menstruation and purity codes in Leviticus), we see how the Karaite women seek to imagine and narrate a new history of purity through their bodies.

The Stains of Culture presents issues of meaning and interpretation in a way valuable to students of women's studies, anthropology, minority cultural production, scholars of religion and Judaism, especially to those interested in exploring Judaism's diversity.