Modernism and Its Merchandise: The Spanish Avant-Garde and Material Culture, 1920-1930 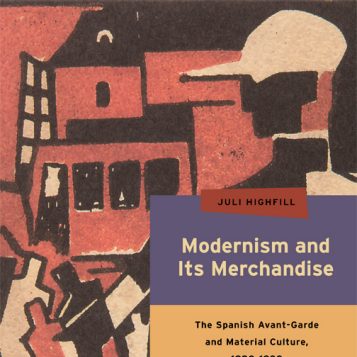 The writers and artists of the Spanish avant-garde, enthralled with the streamlined, mass-produced commodities of the Machine Age, incorporated these objects into their literary and visual works. In doing so, they launched a broad inquiry into the relations between mind and matter, people and things, words and world. In Modernism and Its Merchandise, Juli Highfill traces that dissonant but productive line of inquiry by focusing on the objects of obsession for the Spanish vanguardists—starting with the fruit bowls of cubist still life; continuing with the merchandise, machines, and fashions of the 1920s; and concluding with objects of ruin and decay. The trajectory moves from the natural to the technological domains, from the newfangled to the outmoded. Throughout this study, objects appear ever in motion, engaging and altering their human subjects—whether as objects of exchange, as prosthetic organs, or as triggers for powerful affective responses, such as appetite, taste, and disgust. The insights that arise from these encounters with material things anticipate the knowledge emerging today in the fields of material culture, technology studies, and network theory.

Modernism and Its Merchandise The Spanish Avant-Garde and Material Culture, 1920-1930