CAS Lecture | The Horrors of Adana: Revolution and Violence in the Early Twentieth Century

Bedross Der Matossian,Vice-Chair, Associate Professor of Modern Middle East History, and Hymen Rosenberg Professor in Judaic studies at the Department of History at the University of Nebraska-Lincoln 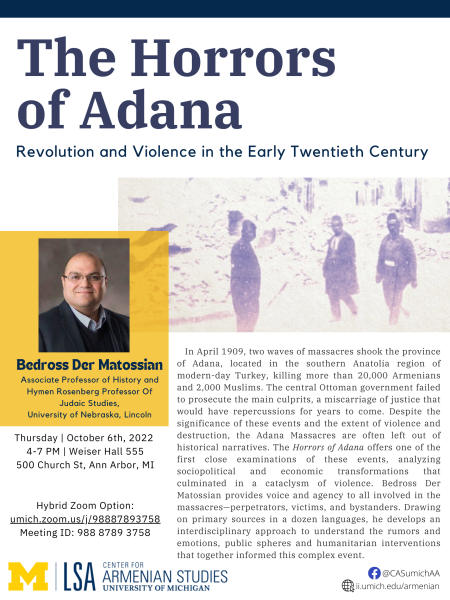 Lecture Abstract: In April 1909, two waves of massacres shook the province of Adana, located in the southern Anatolia region of modern-day Turkey, killing more than 20,000 Armenians and 2,000 Muslims. The central Ottoman government failed to prosecute the main culprits, a miscarriage of justice that would have repercussions for years to come. Despite the significance of these events and the extent of violence and destruction, the Adana Massacres are often left out of historical narratives. The Horrors of Adana offers one of the first close examinations of these events, analyzing sociopolitical and economic transformations that culminated in a cataclysm of violence. Bedross Der Matossian provides voice and agency to all involved in the massacres—perpetrators, victims, and bystanders. Drawing on primary sources in a dozen languages, he develops an interdisciplinary approach to understand the rumors and emotions, public spheres and humanitarian interventions that together informed this complex event. Ultimately, through consideration of the Adana Massacres in micro-historical detail, this book offers an important macrocosmic understanding of ethnic violence, illuminating how and why ordinary people can become perpetrators.

About Bedross: Bedross Der Matossian is the Vice-Chair, Associate Professor of Modern Middle East History, and Hymen Rosenberg Professor in Judaic studies at the Department of History at the University of Nebraska-Lincoln. Born and raised in East Jerusalem, he is a graduate of the Hebrew University of Jerusalem. He completed his PhD in Middle East History at Columbia University in 2008. He has taught at MIT and the University of Chicago. He is the editor of the series Armenians in the Modern and Early Modern World (I.B.Tauris and Bloomsbury Press). He is the author, editor, and co-editor of multiple books including the award-winning book Shattered Dreams of Revolution: From Liberty to Violence in the Late Ottoman Empire (Stanford, California: Stanford University Press, 2014). He is the president of the Society for Armenian Studies (SAS).