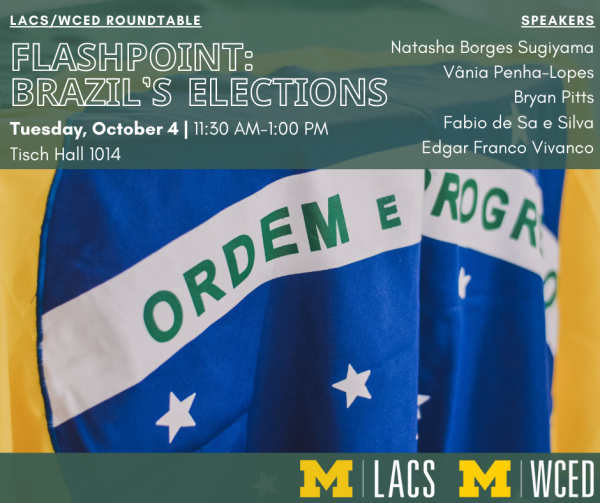 One of the world’s largest democracies, Brazil has faced multiple recent challenges. This interdisciplinary roundtable brings together five scholars to analyze the election and its aftermath. Our expert speakers will address the historical relationship between political leaders and the military, recent legal and political responses to charges of corruption, the importance of race in national politics and policy, and the potential impact of this election on social welfare policies and Brazilian families.

Natasha Borges Sugiyama, Professor of Political Science and Director of the Center for Latin American and Caribbean Studies at the University of Wisconsin-Milwaukee, is a specialist on social policy, local governance, and the politics of poverty relief in Brazil. She is author of Diffusion of Good Government: Social Sector Reforms in Brazil (University of Notre Dame Press, 2013) and Democracy at Work: Pathways to Well-Being in Brazil (with Brian Wampler and Michael Touchton, Cambridge University Press, 2019). Her research on gender inclusion and well-being appears in American Political Science Review, Global Social Policy, Latin American Politics and Society, and the Journal of Development Studies.

A native of Rio de Janeiro, Brazil, Vânia Penha-Lopes is Professor of Sociology at Bloomfield College, co-chair of the Brazil Seminar at Columbia University, and a former member of the executive committee of the Brazilian Studies Association. She graduated from the Universidade Federal do Rio de Janeiro (with honors) and from New York University (Ph.D., Sociology; M.A., Anthropology), and did post-doctoral work at the Universidade do Estado do Rio de Janeiro. She is the author of several books on race relations: The Presidential Elections of Trump and Bolsonaro, Whiteness, and the Nation (Lexington Books, 2022), Confronting Affirmative Action in Brazil: University Quotas Students and the Quest for Racial Justice (Lexington Books, 2017), and Pioneiros: Cotistas na Universidade Brasileira (2013).

Bryan Pitts is a historian of modern Brazil and assistant director of the Latin American Institute at UCLA. He is the author of the forthcoming monograph Until the Storm Passes: Politicians, Democracy, and the Demise of Brazil’s Military Dictatorship, which will be published in January 2023 by University of California Press. He has also written about Brazilian politics in a variety of media outlets, with a particular focus on the role of the United States in laying the groundwork for Brazil’s 2016 parliamentary coup and the 2018 electoral victory of the far-right Jair Bolsonaro.

Fabio de Sa e Silva is Assistant Professor of International Studies and Wick Cary Professor of Brazilian Studies at the University of Oklahoma and an affiliated fellow of Harvard Law School’s Center on the Legal Profession. He currently studies what role law and legal institutions play in processes of democratic backsliding in Brazil and comparatively. Fabio co-directs the OU Center for Brazil Studies, is a member of the Executive Committee of the Brazilian Studies Association, and a Research Fellow at the Washington Brazil Office.

Edgar Franco-Vivanco is an assistant professor of political science at U-M. Edgar’s research agenda explores how colonial era institutions and contemporary criminal violence shape economic under-performance, particularly within Latin America. Edgar’s research on contemporary challenges to development focuses on criminal violence and policing. He is co-authoring a book that draws on extensive fieldwork in Rio de Janeiro, Brazil, to study the differentiated effects of state interventions against organized criminal groups.