IISS Lecture Series. A Spiderweb Story: The Faint but Numerous Strands of an Interconnected Middle Ages in Varqa & Golshah 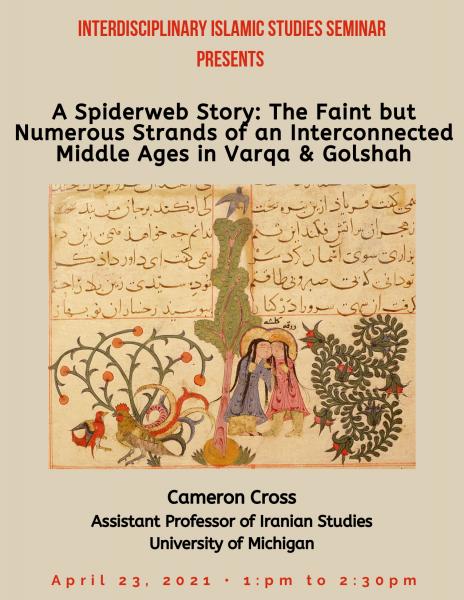 The Interdisciplinary Islamic Studies Seminar is pleased to announce a new public lecture "A Spiderweb Story: The Faint but Numerous Strands of an Interconnected Middle Ages in Varqa & Golshah" with Professor Cameron Cross on April 23 at 1:00-2:30 PM.

The story of Varqa and Golshah, the oldest extant romance in the New Persian language, offers a fascinating glimpse into the interconnected literary histories of the Middle East. At first glance, the poem is evidently an adaptation of a well-known love-story within the Arabic literature of the Abbasid period, but the story quickly gets more complicated. By looking at the internal development of the narrative within the Arabic corpus, we can trace the gradual accretion of "romance" motifs to its plot, bringing it closer within the generic worlds of (parts of) the Thousand and One Nights and Persian love-stories like Bizhan and Manizheh. These same motifs, however, point at a deeper layer of thematic interconnectivity, namely the long accounts of love and adventure written in Greek in the first to fifth centuries CE. The adaptation of Varqa and Golshah into Persian, then, suggests not a "beginning" but a "re-beginning" of romance in the eleventh century, a continuation of Hellenistic models in dialogue with Arabic and Iranian traditions. In fact, the most notable innovation in the Persian tale is not the addition of romance but of epic, with extended battles interposed between the scenes of courtship and separation. These battle scenes, along with the "surprise" ending of a resurrection and mass conversion, bring the romance squarely into the fold of political and sacred history. In this regard, the romance finds a close analogue in one of the earliest and most widely translated romances of the Byzantine and Western European cultural blocs, Floris and Blancheflor. The structural and motival similarities between these two narratives not only point to a common set of literary practices, due to their shared Hellenistic heritage, but also to a certain convergence of historical factors in the eleventh and especially the thirteenth century, an era of intense transregional exchange through trade, pilgrimage, and holy war. Like a spiderweb viewed in the right light, Varqa and Golshah illuminates these many strands, faint but strong, that connect the histories of the Middle East and Mediterranean world.