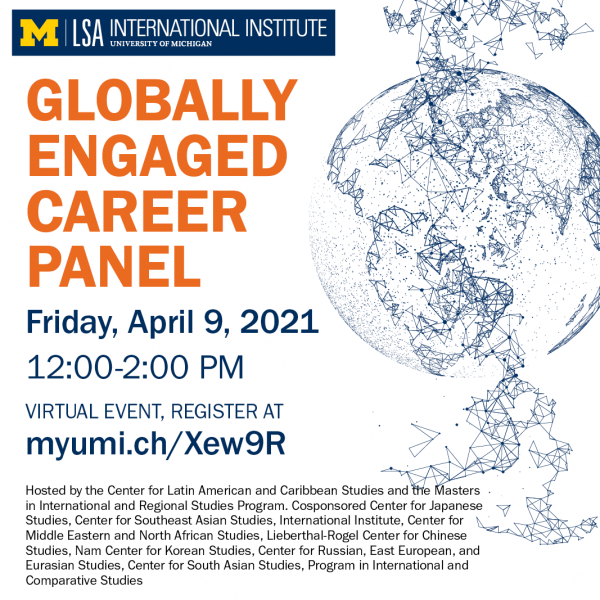 An open Q&A will follow! Registration is required: https://myumi.ch/Xew9R

Join the International Institute for a virtual conversation with a panel of distinguished professionals, all graduates of U-M area studies programs, who have pursued career paths with a global reach. Our panelists will share their stories and experiences, based on questions prepared in advance by U-M Masters in International and Regional Studies (MIRS) students. This event is open to anyone seeking new perspectives on globally engaged career paths and job search insights.

This event is funded in part by five (5) Title VI National Resource Center grants from the US Department of Education.

About the Panelists:
Emily Etue received an M.S. in Natural Resources and Environment and a Graduate Certificate in Southeast Asian Studies from the University of Michigan and spent almost a decade working throughout Asia, mainly in the Asia-Pacific Region. Now based in Texas, her private sector and international non-profit experience opened a network of connections that she actively works to maintain. Emily strongly believes in the power of networking and feels it is the key ingredient to finding a fulfilling career.

Frank Hennick is a Grants Manager at CAPI USA, a nonprofit that provides basic needs, jobs skills, and civic engagement services to immigrant and refugee communities in the Minneapolis/St. Paul metro. Before joining CAPI, he worked with the Karen Organization of Minnesota (KOM), a nonprofit that provides human services to St. Paul’s growing community of Karen refugees from Burma and their children. He completed his M.A. in Russian, East European, and Eurasian Studies in 2013 and his research focused on tensions between nationalism and the process of European integration, and how these tensions play out in education policy, public art and monuments, music, and journalism. He lives in St. Paul, where he remains involved with the Center for Victims of Torture and counts down days until the Brewers’ baseball season.

Lydia McMullen-Laird is a journalist for WNYC radio in New York covering climate change and the environment. Previously, she lived in China and conducted research on a Fulbright Fellowship, worked in environmental law for the Natural Resources Defense Council and began her journalism career producing environmental videos. While studying at the Ford School of Public Policy at the University of Michigan, she interned at the American Embassy in Moscow. McMullen-Laird is also passionate about sustainable living and is the co-founder of the NGO Live Zero Waste.]