IISS Lecture Series. Revelations from the Cairo Geniza on the Ottoman Era in Egypt 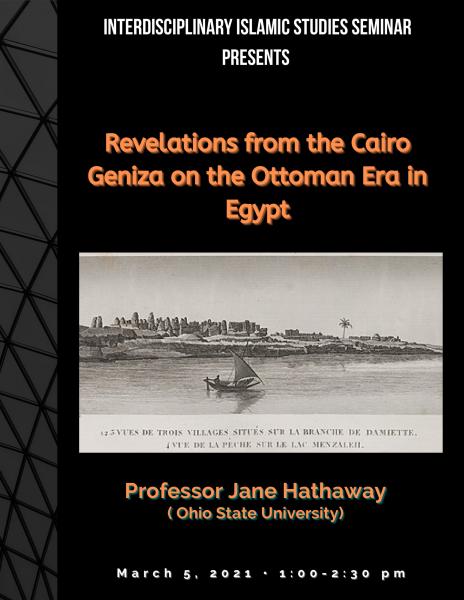 Free and open to the public. Register at https://myumi.ch/zx790

The Interdisciplinary Islamic Studies Seminar is pleased to announce our new public lecture ‘Revelations from the Cairo Geniza on the Ottoman Era in Egypt with Professor Jane Hathaway.

"In this talk, I will present findings from my recent research in Ottoman-era documents of the Cairo Geniza. While the Geniza is well-known as a rich source for the economic and social history of Egypt and the eastern Mediterranean during the high Middle Ages (roughly 10th-early 13th centuries), the smaller volume of documents from the Ottoman period has remained understudied. For the past several months, I have worked with Arabic-script documents from this corpus. My talk will focus on a paleographically challenging document describing an inheritance dispute in the Mediterranean port of Damietta in 1538, only twenty-one years after the Ottoman conquest of Egypt. The case sheds light on the status of Jewish converts to Islam, on Ottoman efforts to revive Damietta as a commercial entrepôt, and on continuities between late Mamluk Sultanate-era and Ottoman-era judicial and chancery practices".