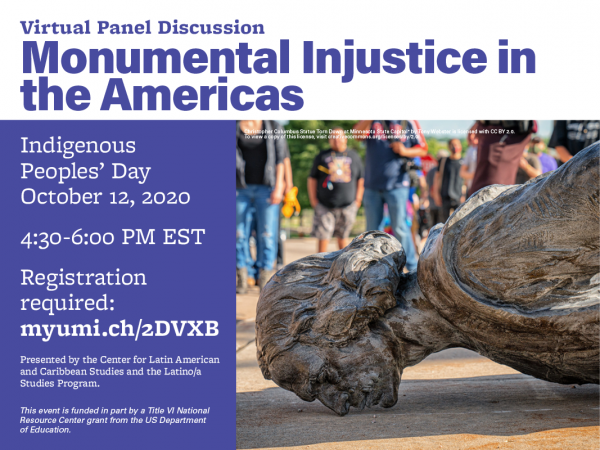 Free and open to the public. Registration required: http://myumi.ch/2DVXB

As a joint effort between the Center for Latin American and Caribbean Studies (LACS) and the Latina/o Studies Program, this panel brings together scholars whose work helps us think about past and present efforts to topple physical monuments to historical figures across the Americas. As the United States recognizes "Hispanic Heritage Month," we push for thinking that cuts across borders. We highlight the hemisphere's interconnected histories of racism, colonialism, conquest and slavery that are at the center of both efforts to memorialize certain figures and stories, and efforts to upend these commemorative structures and the narratives they support. Public discussions around contested symbols of injustice are themselves opportunities to remake historical narratives, and we anticipate this panel will add a rich and important discussion.

ERIN L. THOMPSON is America’s only full-time professor of art crime (John Jay College, CUNY). She studies a variety of relations between art and crime, including the looting of antiquities, museum theft, art made by detainees at Guantánamo Bay, and the legalities and ethics of digital reproductions of cultural heritage. She has discussed these topics for the New York Times, CNN, NPR, and the Freakonomics podcast, among many others. She is currently writing Smashing Statues: On the Rise and Fall of America’s Public Monuments (Norton 2021). She has written and spoken about the science of public art, the history of protests, the legal barriers to removal of controversial art, and examples of innovative approaches to the problem in venues including Art in America, Hyperallergic, the LARB Blog, and the New York Times.

ANA LUCIA ARAUJO is a full Professor of History at the historically black Howard University in Washington DC, United States. Her single-authored books include Slavery in the Age of Memory: Engaging the Past (Bloomsbury Academic, 2020), Reparations for Slavery and the Slave Trade: A Transnational and Comparative History (Bloomsbury Academic, 2017), Brazil Through French Eyes: A Nineteenth-Century Artist in the Tropics (University of New Mexico Press, 2015), Shadows of the Slave Past: Heritage, Memory, and Slavery (Routledge, 2014), and Public Memory of Slavery: Victims and Perpetrators in the South Atlantic (Cambria Press, 2010). She also edited or coedited five books and published dozens of refereed articles in journals and chapters in edited books on topics related to the history and memory of slavery. In 2017, Araujo joined the International Scientific Committee of the UNESCO Slave Route Project. She also serves on the board of editors of the American Historical Review (the journal of the American Historical Association) and the editorial board of the British journal Slavery and Abolition. She is a member of the executive board of the Association for the Study of the Worldwide Diaspora (ASWAD), the editorial review board of the African Studies Review, and the board of the blog Black Perspectives maintained by the African American Intellectual History Society. Currently, Araujo is working on two book projects: Human in Humans in Shackles: An Atlantic History of Slavery in the Americas (under contract with the University of Chicago Press) and The Gift: How Objects of Prestige Shaped the Atlantic Slave Trade and Colonialism (under contract with Cambridge University Press, Cambridge Studies on the African Diaspora series). She just finished Museums and Atlantic Slavery, a short-format book to be published in 2021 by Routledge in the series Routledge Museums in Focus.

ANDREA QUEELEY is a native of Berkeley, California and holds a Ph.D. in cultural anthropology from the City University of New York Graduate Center. She has a joint appointment in Florida International University’s Department of Global and Sociocultural Studies and the African & African Diaspora Studies Program. Her research interests include black and diasporic subjectivity, race and representation, intra-Caribbean migration, and the African Diaspora in Latin America. She has published several journal articles on these themes in addition to her book ”Rescuing Our Roots: The Anglo-Caribbean African Diaspora in
Contemporary Cuba” (University Press of Florida 2015).

OLIVIA CHILCOTE (San Luis Rey Band of Mission Indians) received her M.A. and Ph.D. from the Department of Ethnic Studies at UC Berkeley. She is currently an Assistant Professor of American Indian Studies at San Diego State University and a Critical Mission Studies Postdoctoral Fellow in the Department of History at UC Riverside. Dr. Chilcote's research and teaching focus on the areas of interdisciplinary Native American Studies, federal Indian law and policy, Native American identity, and Native California. Dr. Chilcote grew up in the center of her tribe’s traditional territory in the North County of San Diego, and she is active in tribal politics and other community efforts.


If there is anything we can do to make this event accessible to you, please contact us. Please be aware that advance notice is necessary as some accommodations may require more time for the university to arrange. Contact: alanarod@umich.edu