Comics as a Social Justice Medium 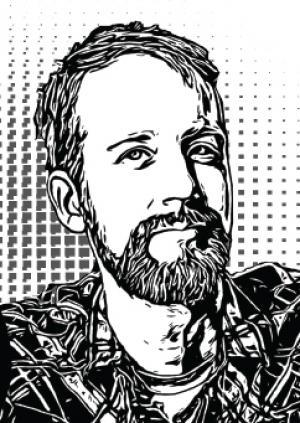 Nate Powell began self-publishing at age 14, and graduated from the School of Visual Arts in 2000. His work includes You Don't Say, Any Empire, Swallow Me Whole, The Silence Of Our Friends, The Year Of The Beasts, and Rick Riordan’s The Lost Hero. Powell is the first and only cartoonist ever to win the National Book Award. His work has also received a Robert F. Kennedy Book Award, two Eisner Awards, two Ignatz Awards, two Harvey Awards, the Michael L. Printz Award, a Coretta Scott King Author Award, four YALSA Great Graphic Novels For Teens selections, the Walter Dean Myers Award, and has been a finalist for the Los Angeles Times Book Prize.

Powell has discussed his work at the United Nations, as well as on MSNBC’s The Rachel Maddow Show and CNN. His books have been placed on school curriculum in over 40 states. His animated illustrations in the Southern Poverty Law Center's Selma: The Bridge To The Ballot documentary will reach roughly one million students in 50,000 schools across the nation.

This event is part of a series of Fall 2017 social justice events called Marching Forward. Visit the Marching Forward website https://sites.lsa.umich.edu/marchingforward/ to learn more about the keynote talk by Congressman John Lewis, Andrew Aydin, and Nate Powell, as well as other events in the series.