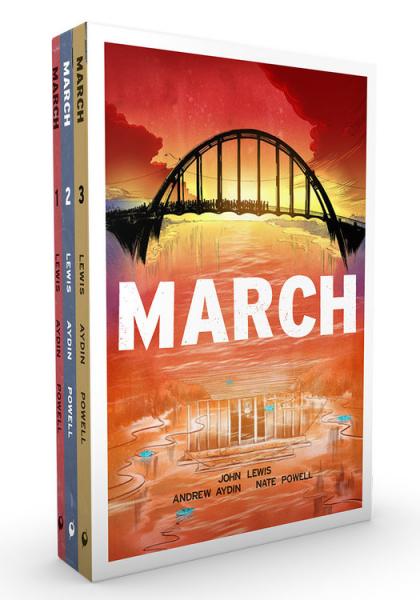 Due to a meeting of the Congressional Black Caucus, the Penny Stamps Speaker Series event featuring Congressman John Lewis, Andrew Aydin, and Nate Powell has been postponed. This event was originally scheduled for Thursday, September 21 at 5:10 pm in the Michigan Theater, but has been rescheduled and will now take place on November 27, 2017 at 7 pm in Hill Auditorium: http://stamps.umich.edu/stamps/detail/john-lewis

On the cancelled event, Chrisstina Hamilton, Stamps Speaker Series Director, stated: “We have deep respect for the immediate criticality of John Lewis’ leadership in congress. While we’re saddened by the lost opportunity to connect and learn from Lewis’ campus visit, we understand that his service to the nation is paramount. We’re thankful to John Lewis’ office for working with us on a reschedule and will announce details as soon as they come together.”

The John Lewis Speaker Series event is co-presented with the Conflict and Peace Initiative at the University of Michigan’s International Institute. The Conflict and Peace Initiative planned to host a number of events with MARCH illustrator Nate Powell. Updates on these events will be announced on the Marching Forward website: https://sites.lsa.umich.edu/marchingforward/

John Lewis is a civil rights leader and an American politician, serving Georgia’s 5th district since 1987. A member of the Democratic party leadership, Lewis has served as Senior Chief Deputy Whip since 2003. Born the son of Alabama sharecroppers, Lewis’s childhood was filled with deeply inspirational moments, including the Montgomery Bus Boycott and the words of the Rev. Martin Luther King Jr. heard on radio broadcasts. As a college student, Lewis’s inspiration fueled his commitment to end legalized racial segregation; he was chairman of the Student Nonviolent Coordinating Committee (SNCC) and was one of the “Big Six” leaders of groups who organized the 1963 March on Washington. His dedication to the highest ethical standards and moral principles has won Lewis the admiration of his colleagues on both sides of the aisle in the United States Congress. Lewis has dedicated his life to protecting human rights, securing civil liberties, and building what he calls “The Beloved Community” in America. Lewis co-wrote his story with his then-Congressional Aid, now Digital Director and Policy Advisor, Andrew Aydin, in the form of the graphic novel trilogy, MARCH (2013). The collaborative work is illustrated by New York Times best-selling graphic novelist Nate Powell.

In partnership with the International Institute’s Conflict and Peace Initiative and the King-Chavez-Parks Visiting Professorship Program.