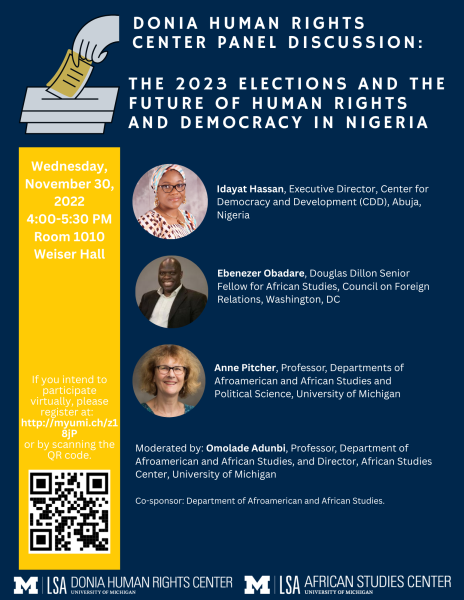 This event is free and open to the public.

She is a lawyer and has held fellowships in universities across Europe and the United States. Her interests span democracy, peace and security, transitional justice, and information and communications technology for development in West Africa. As Director of CDD West Africa, she has strengthened its position as a leader in technology related research through a portfolio of projects. This includes, but is not limited to, analyses of the nexus between social media platforms, election processes, and electoral outcomes, specific studies exploring the role played by individual platforms – for example WhatsApp – during voting periods, and an assessment of the use of personal data in political campaigning in Nigeria. Under her leadership, CDD West Africa move from being unranked in 2013, to 11th out of 94 think-tanks in sub-Saharan Africa by 2020 according to a University of Pennsylvania index.

Her expertise in the civil and democratic space in West Africa has been recognized and led to her membership of many reputable committees. She sits on the board of the Nigerian National Human Rights Commission and was recently added as a member of the National Peace Committee; a body made up of prominent citizens charged with maintaining peace during Nigeria’s election. Her insights have also informed the work of security agencies, particularly the Nigerian Army’s Operation Safe Corridor for which she provided conceptual clarity on the Boko Haram phenomenon drawing on extensive research in Nigeria’s northeast.

Idayat regular appears in international and local media as an expert on the region and has been quoted by the BBC, China Central Television, Radio France Internationale, Voice of America, Bloomberg, Washington Post, Financial Times, Economist, Guardian, and Deutsche Welle. She was co-editor of a recently published volume entitled WhatsApp and Everyday Life in West Africa: Beyond Fake News (Bloomsbury).

Ebenezer Obadare, Douglas Dillon Senior Fellow for Africa Studies, Council on Foreign Relations, Washington, DC
Ebenezer Obadare is Douglas Dillon Senior Fellow for Africa Studies at the Council on Foreign Relations (CFR). Before joining CFR, he was a professor of sociology at the University of Kansas, Lawrence. He is also a senior fellow at the New York University School of Professional Studies Center for Global Affairs, as well as a fellow at the University of South Africa’s Institute of Theology. Obadare was a Ralf Dahrendorf Scholar and Ford Foundation International Scholar at the London School of Economics and Political Science where he completed his Ph.D. in social policy in 2005. He holds a BA in history and an MSc in international relations from the Obafemi Awolowo University, Ile-Ife, Nigeria. Obadare was a political reporter for The News and TEMPO magazines from 1993 to 1995, and a lecturer in international relations at the Obafemi Awolowo University from 1995 to 2001. His primary areas of interest are civil society and the state, and religion and politics in Africa. Obadare is editor of Journal of Modern African Studies, published by Cambridge University Press.

Anne Pitcher, Professor, Departments of Afroamerican and African Studies and Political Science, University of Michigan
Anne Pitcher is the Joel Samoff Collegiate Professor of Political Science and Afroamerican and African Studies at the University of Michigan. Her current research examines election related violence, state capture, and distributive politics in developing countries, especially those in Africa. She has conducted fieldwork, archival, and survey research in Angola, Mozambique, Kenya, Zambia, and South Africa. Her publications include 4 books and dozens of articles in scholarly journals. Along with Grant Masterson of the Electoral Institute for Sustainable Democracy in Africa (EISA), she is Co-Principal Investigator of "ObSERV: The Observation of Subnational Election Related Violence and Security in Africa” funded by the Carnegie Corporation of New York.

In February 2023, Nigerians will elect new representatives including a new president. This election would mark Nigeria’s 24 years of a post-military authoritarian multi-party democracy. Nigeria transitioned to democracy in May 1999 after several decades of military rule. Since the transition to Democracy, the country has been bedeviled with challenges of insecurity as result of Islamist insurgency in the Northeast, oil insurgency in the Niger Delta, Biafra separatist in the East and agitation for fiscal federalism in the West. Many of these challenges have resulted in gross violations of human rights and erosion of democratic institutions. At the same time, the elections in 2023 gives a new generation of voters, mainly youths, a hope of heralding a new era of political and economic reforms that could help strengthen democratic institutions in the country. Therefore, this panel brings together experts on elections, democracy and human rights to interrogate the future of democratic practices in Nigeria. This panel will examine the prospects for 2023 elections. Will the surge in new voter registration orchestrated by youths through social media platforms herald a new political era in Nigeria? Will the election be a return to the status quo? Will questions of human rights shape electioneering campaigns? Will violence play a role in the election? And, most fundamentally, will these elections reflect the will of the Nigerian electorate, or will ethnicity and religion play an outsized role in Nigerians' electoral choices?