Paul Doherty, a founding member of the Bloody Sunday Justice Campaign and owner and operator of Bogside History Tours in Derry 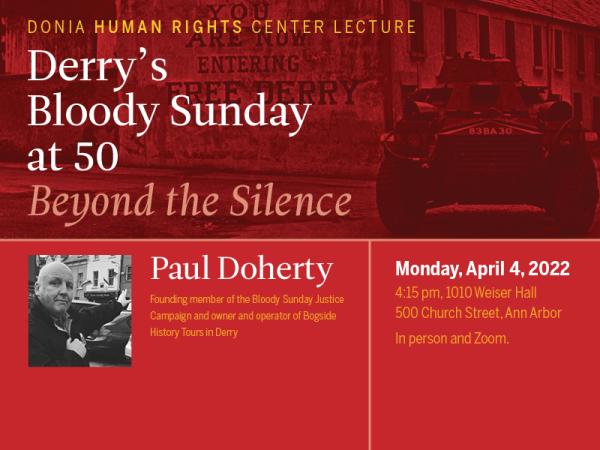 On Sunday, January 30, 1972, as an anti-internment march in Derry drew to an end, British paratroopers attacked the marchers, shooting dead 13 unarmed civilians, six of them still legally children, and wounding another 18, one of whom subsequently died. This marked the end of the civil rights campaign in Northern Ireland.

As the shooting ended on Bloody Sunday, the city of Derry descended into a silence that lasted past the funerals. This silence continued in homes for many years afterward. On the 50th anniversary of Bloody Sunday, Paul Doherty, whose father Patrick was killed that day, will look through that silence and discuss what the families endured in the aftermath of the tragedy and what they ultimately achieved in their justice campaign over the next 50 years.

Cosponsored by the U-M Program in International and Comparative Studies.

Speaker: Paul Doherty is a founding member of the Bloody Sunday Justice Campaign and was instrumental in setting up the Bloody Sunday Inquiry in 1998. Paul is the owner and operator of Bogside History Tours in Derry, where he shares a personal, in-depth account of the history of the city, the Bloody Sunday Massacre, and first-hand knowledge of the ongoing campaign for justice on a daily basis.

Commentator: John Ciociari is an associate professor of public policy and director of the Ford School's International Policy Center and Weiser Diplomacy Center. His research focuses on international law and politics in the Global South.