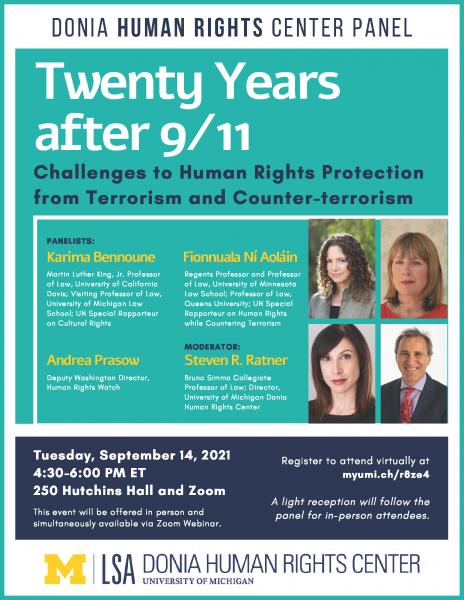 Please note: This panel discussion will be offered in person on the University of Michigan Ann Arbor campus at Hutchins Hall, Room 250 (625 State Street) and will be simultaneously available via Zoom Webinar.

This event is free and open to the public, but registration is required if you intend to participate virtually. Once you've registered, the joining information will be sent to your email. Register at: https://myumi.ch/r8ze4

The anniversary of the September 11 attacks provides an opportunity to reflect on their legacy for the protection of human rights. A panel of international experts will address the implications of the attacks for the victims of terrorist acts as well as for those caught up in counter-terrorism actions by governments. We will also explore the challenges to and opportunities for cooperation among governments and international organizations to protect human rights in this context.

Karima Bennoune holds the Homer G., Angelo and Ann Berryhill Endowed Chair in International Law and is a Martin Luther King, Jr. Professor of Law at the University of California, Davis, School of Law. During academic year 2021-21, she will be a visiting professor at the University of Michigan Law School. She has served as the United Nations Special Rapporteur in the field of cultural rights since November 2015. In 2017, she served as an expert in the reparations phase of the groundbreaking Al Mahdi Case before the International Criminal Court concerning intentional destruction of cultural heritage in Mali. A former Legal Advisor for Amnesty International, her field missions throughout her career have included Afghanistan, Bangladesh, Cyprus, Egypt, Lebanon, Mali, Malaysia, Maldives, Niger, Pakistan, Poland, Serbia and Kosovo, Southern Thailand, Tunisia and Tuvalu. Her book, “Your Fatwa Does Not Apply Here: Untold Stories from the Fight Against Muslim Fundamentalism,” which recounts the stories of people of Muslim heritage working against extremism, won the 2014 Dayton Literary Peace Prize. The TED talk based on the book has been viewed by over 1.5 million people. Professor Bennoune serves on the scholar advisory board for Muslims for Progressive Values.

Professor Fionnuala Ní Aoláin is concurrently Regents Professor and Robina Professor of Law, Public Policy and Society at the University of Minnesota Law School and Professor of Law at the Queens University, Belfast, Northern Ireland. She has previously taught or held visiting positions at Harvard Law School, Columbia Law School, Princeton University, and the Hebrew University of Jerusalem. Professor Ní Aoláin is the recipient of numerous academic awards and honors including the Leverhulme Fellowship, British Academy Awards, Fulbright scholarship, the Alon Prize, the Robert Schumann Scholarship, a European Commission award, and the Lawlor fellowship. She is an elected fellow of the Royal Irish Academy. She has published extensively in the fields of emergency powers, counter-terrorism and human rights, conflict regulation, transitional justice and sex based violence in times of war. Her book Law in Times of Crisis (CUP 2006) was awarded the American Society of International Law’s preeminent prize in 2007 - the Certificate of Merit for creative scholarship and her published work has been extensively recognized for its path-breaking contributions and its rigor. Professor Ní Aoláin is currently the United Nations Special Rapporteur on the Protection and Promotion of Human Rights while Countering Terrorism (2017-), and was re-elected for a second term in August 2020.

Andrea Prasow, deputy Washington director, at Human Rights Watch, conducts advocacy before the US government on global human rights issues, with a particular focus on national security and foreign policy. Prasow frequently appears on domestic and international radio and television, and has published in a wide range of print and online media outlets, including Politico, The Hill, and Foreign Policy.

Prior to joining Human Rights Watch, Prasow was a defense attorney with the Office of Military Commissions. She served as assistant counsel for Salim Hamdan in the only contested military commission trial to date. Prasow was previously an associate at a New York law firm where, in addition to representing large corporations in complex civil litigation she served as habeas counsel for ten Saudi detainees at Guantanamo. Andrea holds an Honors B.A. from the University of Toronto in political science and a J.D. from Georgetown University Law Center. She is admitted to practice in the State of New York and the District of Columbia.