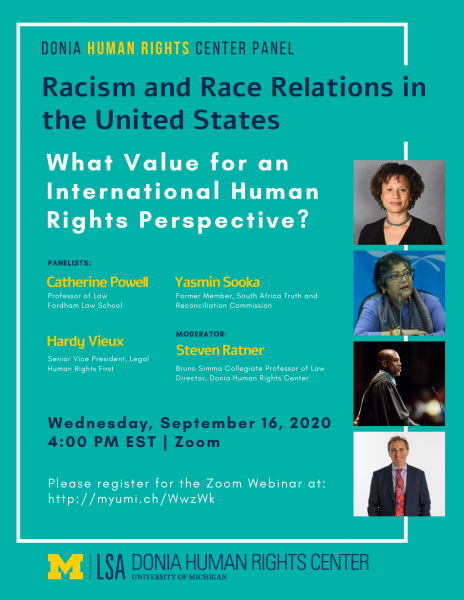 Debates and protests in the United States about systemic racism are dominated by discussions of American institutions, law, and practices and the need to change them. But international human rights law, developed over decades to address and respond to human rights violations around the world, offers important frameworks and rules to address racism and race discrimination. Human rights law has already been utilized by some advocates for change in the U.S., but not as much as in other countries. This distinguished panel will offer perspectives on whether and how an international human rights lens provides an added value for discussions of, and solutions to, problems of racism in the United States. It will consider how human rights law might change ongoing conversations, as well as its limits. It will also offer a comparison between the use of human rights on issues of race discrimination in the United States and South Africa.

Please note: This event will be held virtually EST through Zoom. This webinar is free and open to the public, but registration is required. Once you've registered the joining information will be sent to your email.

Catherine Powell is a Professor at Fordham Law School, where she teaches constitutional law, human rights, and digital rights. She is also an Adjunct Senior Fellow at the Council on Foreign Relations (CFR), jointly affiliated with the Digital & Cyberspace Policy and Women & Foreign Policy programs.

Powell’s current work focuses on the role of race and gender ( https://www.justsecurity.org/71742/viral-justice-interconnected-pandemics-as-portal-to-racial-justice/) in our emerging touchless society—and the ways it amplifies structural inequalities in the platform economy. In recent writing, she has coined the terms Color of Covid (in a CNN op-ed: https://www.cnn.com/2020/04/10/opinions/covid-19-people-of-color-labor-market-disparities-powell/index.html) and Gender of Covid (in CFR’s Think Global Health blog: https://www.thinkglobalhealth.org/article/color-and-gender-covid-essential-workers-not-disposable-people), building on other recent law review articles on intersectionality in the Georgetown Law Journal ( https://papers.ssrn.com/sol3/papers.cfm?abstract_id=3605810 ) and UCLA J. Int’l L. Foreign Aff ( https://papers.ssrn.com/sol3/papers.cfm?abstract_id=3339362 ).

Her prior experience includes stints on President Barack Obama’s White House National Security Council (Director for Human Rights) and Secretary of State Hillary Clinton's Policy Planning Staff. Previously Professor Powell has been on the Columbia Law School faculty as founding director of the Human Rights Institute and the Human Rights Clinic. Since then, she has been a visiting professor at Columbia and Georgetown Law Schools. Before going into academia, she was a litigator with the NAACP Legal Defense and Educational Fund, following a clerkship with SDNY Judge Leonard Sand.

Professor Powell is a graduate of Yale College, Yale Law School, and Princeton’s graduate program in the Woodrow Wilson School of Public and International Affairs. She was a post-graduate fellow at Harvard Law School.

Yasmin Sooka is a leading human rights lawyer. Sooka is the former executive director of the Foundation for Human Rights in South Africa. Sooka served on the South African Truth and Reconciliation Commission from 1996 to 2001 and chaired the committee responsible for the final report from 2001 to 2003. She was appointed by the United Nations to serve on the Truth and Reconciliation Commission of Sierra Leone from 2002 to 2004. Since 2000, Sooka has also been a member of the advisory body on the Review of Resolution 1325 on women and peace and security. In July 2010, she was appointed to the three member panel of experts advising the secretary general on accountability for war crimes committed during the final stages of the war in Sri Lanka. Sooka currently chairs the UN Commission on Human Rights in South Sudan.

Since January 2017, Hardy has also served as a Towsley Foundation Policymaker in Residence at the University of Michigan's Gerald R. Ford School of Public Policy. In that role, Hardy taught a seminar focusing on the role of nongovernmental organizations in policy formulation. He has led weeklong student spring break trips to Guatemala, during which students volunteered with a Guatemalan NGO that applies multidisciplinary forensic scientific methodologies to identify missing and disappeared persons to provide truth to victims and their families, assist in the search for justice and redress, and strengthen the rule of law. In fall 2020, Hardy is once again teaching a Ford School seminar entitled The Role of Courts in International Human Rights.

In 2014, Hardy served as a policy fellow in the Middle East, where he worked at Save the Children International in Amman, Jordan. There, he handled child protection policy issues impacting Syrian refugee children living in Jordan.

Prior to living in the Middle East, Hardy was in private legal practice in Washington, D.C., for over ten years. While in private practice, Hardy also handled numerous pro bono matters, ranging from litigation stemming from the abuses at the Abu Ghraib prison in Iraq to juvenile detention impact litigation and asylum representation. In 2010, the D.C. Bar recognized him as its Pro Bono Lawyer of the Year.

Before moving to private practice, Hardy was a criminal appellate defense counsel in the United States Navy’s Judge Advocate General’s Corps, where he served as lead counsel in a capital punishment case. He is a frequent media commentator on military justice issues.

Hardy started his legal career as a law clerk in federal district court in Denver, Colorado.

Hardy serves on the board of directors of the National Military of Justice and the WISER Girls Secondary School, a Kenyan residential school focused on empowering young women. He also served on the board of trustees of DC Scholars Public Charter School.