CSEAS Virtual Mini-Symposium. Press Freedom and the Pandemic in Duterte’s Philippines: Views from the Ground Up 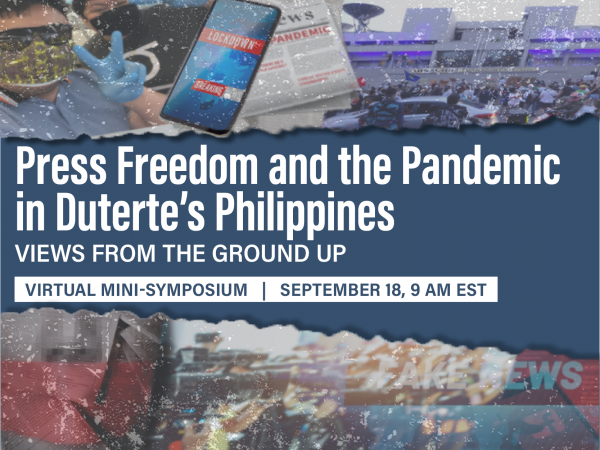 This webinar is open to the public. Please register at: http://myumi.ch/7ZNg0

Supplementary reading materials for this event are available: http://myumi.ch/dONEB

The Philippines’ response to the COVID19 pandemic is set against a backdrop of heightened antagonism against mass media, a hostile attitude toward popular dissent, and an upsurge of fake news mostly sympathetic to the government. When the virus began to take its toll in the first quarter of this year, President Rodrigo Duterte imposed what would turn out to be the toughest and longest lockdown in the world. His political allies in Congress then worked to enact Republic Act No. 11469, which authorized Duterte to exercise special emergency powers, including realigning the national budget, thus further weakening the institutional mechanisms for checks and balances. Congress also managed to pass an Anti-Terrorism Law at record speed, which critics consider as yet another opportunity to quell opposition, as can be gleaned from a spate of unresolved assassinations of political activists. The most palpable blow happened when the application for franchise renewal of ABS-CBN, the country’s biggest media network known to be critical of the Duterte administration, was denied by Congress after refusing to act on it initially. As these things unfolded, the Philippines keyed in the most number of COVID19 cases in Southeast Asia, coupled with its first economic recession in almost three decades and the highest unemployment rate in the region, with almost half of the adult population left without a job. A recent multibillion-peso corruption scandal at the government-owned insurer PhilHealth further compromised the already overburdened public health system. This virtual roundtable discussion seeks to make sense of the many overlaps from the ground up between the state of press freedom in the Philippines and the ongoing efforts of the Duterte administration to control the pandemic. Philippine-based resource speakers will get together in what promises to be a multifocal discussion on the social and legal circumstances informing a country’s response to a global health crisis.

Inday Espina-Varona, award-winning journalist, former chair of the National Union of Journalists of the Philippines, and former Knight International Fellow at Stanford University.

Carlos Conde, former journalist and researcher of Human Rights Watch, former Jefferson Fellow at the East-West Center of the University Hawaii, and former fellow at the Philippine Center for Investigative Journalism and Center for Media Freedom and Responsibility.