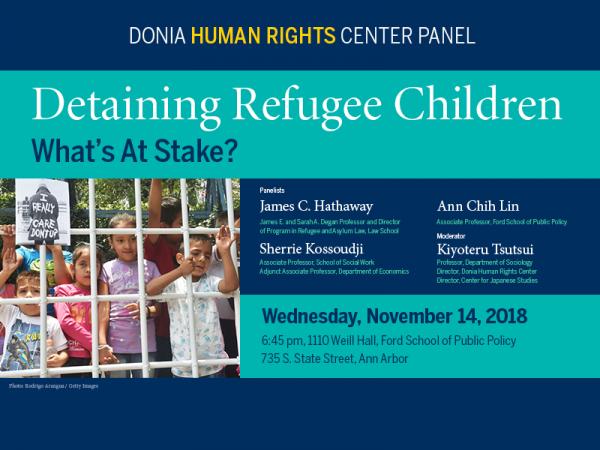 The intensifying border control efforts by the Trump administration came to a head earlier this year when the authorities started aggressively attacking the integrity of families seeking asylum in the U.S., keeping children in detention separate from their parents. Subsequent legal battles and public debates revealed strong sentiments against the policy, leading to a rare concession by the administration. As efforts to reunite families continue, this panel of three experts examines the psychological, political, and legal impact of the policy on the families, policy makers, and public opinions, asking the question of what's at stake.

James C. Hathaway
James E. and Sarah A. Degan Professor of Law and Director of Program in Refugee and Asylum Law, Law School

James C. Hathaway is the James E. and Sarah A. Degan Professor of Law and Director of the Program in Refugee and Asylum Law at the University of Michigan. He is also Distinguished Visiting Professor of International Refugee Law at the University of Amsterdam. Hathaway earned law degrees from the Osgoode Hall Law School (Toronto) (LL.B. Honours) and Columbia (LL.M., J.S.D.), and has received doctoral degrees honoris causa from the Université catholique de Louvain (2009) and University of Amsterdam (2017). From 2008 until 2010 Hathaway was on leave from the University of Michigan to serve as the Dean of Law and William Hearn Professor of Law at the University of Melbourne, where he established Australia’s first all-graduate legal education program. He previously held positions as Professor of Law and Associate Dean of the Osgoode Hall Law School, Canada (1984-1998), Counsel on Special Legal Assistance for the Disadvantaged to the Government of Canada (1983-1984), and Professeur adjoint de droit at the Université de Moncton, Canada (1980-1983). He has been appointed a visiting professor at the American University in Cairo, and at the Universities of California, Macerata, San Francisco, Stanford, Tokyo, and Toronto. Hathaway’s publications include more than one hundred journal articles, book chapters, and studies; a leading treatise on the refugee definition ("The Law of Refugee Status"' second edition 2014 with M. Foster; first edition 1991, republished in both Russian in 2007 and Japanese in 2008); an interdisciplinary study of models for refugee law reform ("Reconceiving International Refugee Law", 1997); and The Rights of Refugees under International Law (2005, republished in Japanese in 2014 and Chinese 2017), the first comprehensive analysis of the human rights of refugees set by the UN Refugee Convention and the International Bill of Rights. He is the founding Editor of "Cambridge Asylum and Migration Studies" and Senior Advisor to Asylum Access, a non-profit organization committed to delivering innovative legal aid to refugees in the global South. Hathaway regularly advises and provides training on refugee law to academic, non-governmental, and official audiences around the world.

Sherrie A. Kossoudji is an associate professor in the School of Social Work and an adjunct associate professor in the Department of Economics. Her principal research is on issues related to migration and immigration. She has written numerous articles on the legal status of immigrant workers in the United States and the incentives to cross the border clandestinely. Much of her work attempts to discern the link between legal status in the United States and economic outcomes—leading to papers on the impact of legalization programs on residents who are undocumented. Her teaching also emphasizes the impact of immigration policies. Contested Borders, a mini-course that explores ‘policy on the ground’, takes place at the U.S./Mexico border. She recently started a project on refugee movements and asylum policies around the world. At the moment, there are more than 68 million forcibly displaced people, 25 million of whom are refugees, whose lives are at risk.

Ann Chih Lin is Associate Professor at the University of Michigan Gerald R. Ford School of Public Policy. Dr. Lin studies immigrant political socialization -- how immigrants learn about and relate to government authority in their new country – and immigration policy – how governments choose to recruit migrants. She was co-principal investigator on the Detroit Arab American Study, a landmark public opinion survey of Arab Americans in Detroit, and a co-author of a book on the study, "Citizenship in Crisis: Arab Detroit after 9/11." With Yan Chen and Kentaro Toyama, she is exploring methods to reduce bias against Muslims in two metro Detroit cities. Dr. Lin received her Ph.D. in political science from the University of Chicago.

Kiyoteru Tsutsui is Professor of Sociology, Director of the Donia Human Rights Center, and Director of the Center for Japanese Studies at the University of Michigan, Ann Arbor. His research on globalization of human rights and its impact on local politics has appeared in American Sociological Review, American Journal of Sociology, Social Forces, Social Problems, Journal of Peace Research, Journal of Conflict Resolution, and other social science journals. His book publications include "Rights Make Might: Global Human Rights" and "Minority Social Movements in Japan" (Oxford University Press 2018), and a co-edited volume (with Alwyn Lim) "Corporate Social Responsibility in a Globalizing World" (Cambridge University Press 2015). He has been a recipient of National Endowment for the Humanities Fellowship, National Science Foundation grants, the SSRC/CGP Abe Fellowship, Stanford Japan Studies Postdoctoral Fellowship, and other grants as well as awards from American Sociological Association sections on Global and Transnational Sociology (2010, 2013), Human Rights (2017), Asia and Asian America (2018), and Collective Behavior and Social Movements (2018).

If you are a person with a disability who requires an accommodation to attend this event, please reach out to us at least 2 weeks in advance of this event at: umichhumanrights@umich.edu. Please be aware that advance notice is necessary as some accommodations may require more time for the university to arrange.
Donia Human Rights Center
500 Church St.
Suite 300
Ann Arbor, MI 48109-1042
umichhumanrights@umich.edu
A member of the International Institute
734.615.8482
734.763.9154
Sitemap
Facebook Twitter Youtube