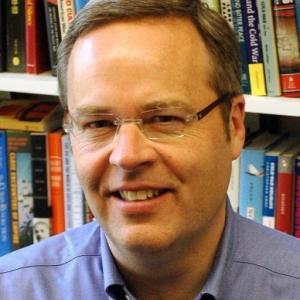 American assumptions about their own primacy in the making of a global human rights order ran deep in the 1970s, a perception that persists to the present day. As one observer has said, the United States is "the one nation where human rights is center stage for the world." In fact there was a global explosion of interest in human rights in the 1970s. But Americans did not get there first. In fact, one might argue they got there last. Bradley explains why that is so, focusing on the rise of new transnational forces that transformed the very nature of international order in the late twentieth century.

Mark Philip Bradley is the author of "The World Reimagined: Americans and Human Rights in the Twentieth Century" (Cambridge, 2016), "Vietnam at War" (Oxford, 2009), and "Imagining Vietnam and America: The Making of Postcolonial Vietnam" (UNC, 2000), which won the Harry J. Benda Prize from the Association for Asian Studies. He is the coeditor of "Familiar Made Strange: American Icons and Artifacts after the Transnational Turn" (Cornell, 2015), "Making Sense of the Vietnam Wars" (Oxford, 2008), and "Truth Claims: Representation and Human Rights" (Rutgers, 2001). Bradley's work has appeared in the "Journal of American History," the "Journal of World History," "Diplomatic History," and "Dissent."

A recipient of fellowships from the American Council of Learned Societies, the National Endowment for the Humanities, and Fulbright-Hays, Bradley is currently working on an intellectual history of the global south and serves as the general editor for the four volume "Cambridge History of America and the World."

He has served as president of the Society for Historians of American Foreign Relations and is coeditor of the Cornell University Press book series, "The United States in the World."
Donia Human Rights Center
500 Church St.
Suite 300
Ann Arbor, MI 48109-1042
umichhumanrights@umich.edu
A member of the International Institute
734.615.8482
734.763.9154
Sitemap
Facebook Twitter Youtube