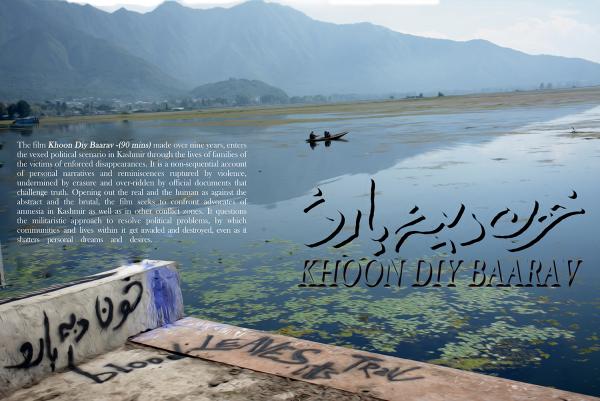 The film Khoon Diy Baarav enters the vexed political scenario in Kashmir through the lives of families of the victims of enforced disappearances. In an enforced disappearance people literally disappear, from their loved ones and their community, when state officials (or someone acting with state consent) grab them from the street or from their homes and then deny it, or refuse to say where they are.Today it is recognized as a crime under international law. The film is a non-sequential account of personal narratives and reminiscences ruptured by violence. Made over nine years it explores memory as a mode of resistance, constantly confronting and morphing - from the personal to political, individual to collective. The film looks at the ways in which those affected by violence have no choice but to remember.

The screening of the film will be followed by a discussion with the filmmaker, Iffat Fatima.

She very recently did the audio visual design for an exhibition Gold Dust Of Begum Sultans (19 April -10th May 2016) at The Indira Gandhi National Centre for The Arts , New Delhi. In 2015 she co-edited a compendium Bread Beauty Revolution, Khwaja Ahmad Abbas (1914-1987). In 2004, she completed a Fellowship, Recasting Reconciliation through Culture and the Arts, at the Brandeis University, Boston, USA. In 2001, she was awarded the Asia Fellowship for her work in Sri Lanka, Inter-communal Relations and Education: The Sri Lankan Experience.

Her films include, Lanka- the other side of war and peace, on the history of overlapping conflicts in Sri Lanka; The Kesar Saga, on storytelling in Ladakh; In the Realm of the Visual, on one of India’s most prolific and versatile artist and designer, Dashrath Patel; Boojh Sakey to Boojh, on the contemporary understanding of the thirteenth-century Sufi poet and scholar Amir Khusro. Her video installation, Ethnography of a European city: Conversations in Salzburg, questions some of the assumptions in the east vs. west polarity/ dichotomy /disparity.