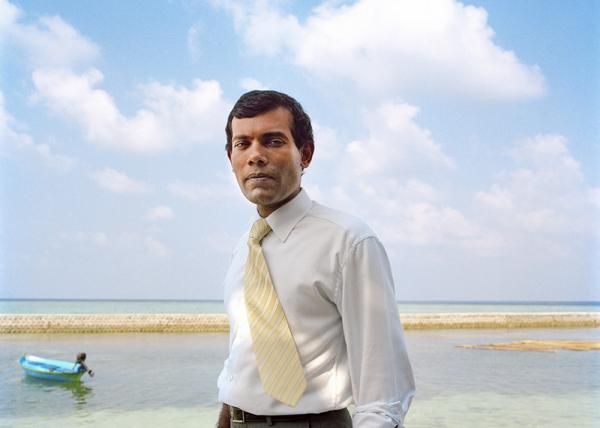 In 2008, Mohamed Nasheed became the first democratically elected president in the history of the island nation of the Maldives. His presidency was marked first by his heroic efforts to save his country from the ravages of rising sea-levels resulting from climate change, as captured in the critically acclaimed documentary film The Island President (2011). Then, afraid that he would expose the rampant corruption on their watch, powerful players in the previous regime conspired to force him out of presidency and tortured and persecuted him. With his health deteriorating, he managed to find exile in London with the help from international lawyers Jared Genser, Amal Clooney, and Ben Emmerson. He continues his tireless efforts to promote democracy in his homeland and is now poised to pursue presidency again in his beloved homeland. Featuring President Mohamed Nasheed, his lawyer Jared Genser, and Professor Rebecca Hardin of the UM School of Natural Resources and moderated by DHRC Director Kiyoteru Tsutsui, the Donia Human Rights Center Panel will examine how global challenges of climate change, environmental justice, human rights, and democracy converged in the Maldives and President Nasheed, and explore possible ways forward as the next presidential election in the Maldives looms in 2018.

H. E. Mohamed Nasheed (President of Maldives, 2008-2012)
Mohamed Nasheed is an activist, journalist, and politician who served as the first democratically elected president of the Maldives. Mr. Nasheed made a name for himself as a dissident journalist, regularly challenging the authoritarian regime of former president Maumoon Gayoom. As a result of his outspoken criticism, he was repeatedly imprisoned. In 2003, Mr. Nasheed formed the opposition Maldivian Democratic Party and in 2008, on a platform of human rights and democratic principles, he was elected president in the country’s first multi-party democratic elections. Mr. Nasheed used his position as a platform for democratic reforms and climate activism. Mr. Nasheed's presidency was cut short in 2012 by a coup, and he was later arrested on false charges intended to remove him and his political party, which continued to be very popular among the people. Freedom Now worked on his case, along with Amal Clooney, and in October 2015, the UN Working Group on Arbitrary Detention issued an opinion finding Mr. Nasheed's detention to be in violation of international law and called on the Maldivian government to release him. After an escalating advocacy campaign by Freedom Now and his pro bono legal team, the government granted Mr. Nasheed medical leave in January 2016, allowing him to travel to the UK. In May 2016, the UK government granted him asylum. President Nasheed won the 2009 Anna Lindh Prize, in recognition of his work promoting human rights, democracy and environmental protection. In September 2009, Time Magazine declared President Nasheed a ‘Hero of the Environment’. In April 2010, the United Nations presented Nasheed with its ‘Champions of the Earth’ environment award. In August 2010, Newsweek named President Nasheed in its list of ‘World’s Ten Best Leaders’. In 2012, The Island President, a documentary feature film about Nasheed, was released in theaters worldwide. In June 2012, Nasheed was presented with the James Lawson Award for the practice of non-violent action.

Jared Genser
Jared Genser is Managing Director of Perseus Strategies, a law and consulting firm that focuses on human rights, humanitarian, and corporate social responsibility projects. He is also Founder of Freedom Now, a non-governmental organization that works to free prisoners of conscience worldwide. Genser was an Associate of the Carr Center for Human Rights Policy at Harvard University from 2014-2016, a Visiting Fellow with the National Endowment for Democracy from 2006-2007, and was previously named by the National Law Journal as one of “40 Under 40: Washington’s Rising Stars.” Before founding Perseus Strategies, Genser was a partner in the government affairs practice of DLA Piper LLP and a management consultant with McKinsey & Company. He has taught semester-long seminars about the UN Security Council at Georgetown University Law Center and the University of Michigan and University of Pennsylvania law schools. His pro bono clients have included former Czech Republic President Václav Havel and Nobel Peace Prize Laureates Aung San Suu Kyi, Liu Xiaobo, Desmond Tutu, and Elie Wiesel. Genser holds a B.S. from Cornell University, an M.P.P. from Harvard’s John F. Kennedy School of Government, where he was an Alumni Public Service Fellow, and a J.D. cum laude from the University of Michigan Law School. He is author of The UN Working Group on Arbitrary Detention: Commentary and Guide to Practice(Cambridge University Press, Forthcoming 2017). In addition, he is co-editor of The UN Security Council in the Age of Human Rights (Cambridge University Press, 2014) and The Responsibility to Protect: The Promise of Stopping Mass Atrocities in Our Times (Oxford University Press, 2011). Genser is the recipient of the American Bar Association’s International Human Rights Award, Liberty in North Korea’s Freedom Fighter Award, and the Charles Bronfman Prize."

Rebecca Hardin
Professor Hardin’s areas of interest and scientific study include human/wildlife interactions, and social and environmental change related to wildlife management, tourism, logging, and mining in equatorial Africa, especially the western Congo basin. Recent projects also focus on the increasingly intertwined practices of health, environmental management, and corporate governance in southern and eastern Africa, including sites in South Africa and Kenya. In 2013-14 she advised a student team studying environmental justice cases within the U.S., and connecting them to the international Environmental Justice Atlas. In 2014–15 she advised a student team assessing groundwater and surface water resources across the African continent, and advising GETF about how to make a better business case for water related investment by businesses in Africa. She teaches and mentors students interested in international environmental practice and policy, wildife management, human relationships to landscape, environmental justice, and global health. She also provides support for the students who are the genius behind SNRE's weekly environmental talk and music show, It’s Hot in Here, airing at noon on Fridays on WCBN FM 88.3, and with an accompanying blog and mp3 archive. The show helps researchers discuss their work with local audiences interested in environmental policy affecting Michigan, and also reach out to national and transnational audiences streaming the show via the Internet. Her recent book Transforming Ethnographic Knowledge explores the discipline of anthropology as a set of skills and tools for social change in sectors as different as business, biological conservation, conflict resolution, and biomedical care. Rebecca teaches courses in both SNRE and the Department of Anthropology, she also founded and coordinates SNRE's Environmental Justice Certificate Program for students beyond those two units working in or studying communities who are either negatively impacted by environmental harms, or experiencing inequality of access to environmental goods and ecosystem services. Rebecca currently coordinates the Environmental Justice field of study and coordinates the Michigan Sustainability Cases initiative.