Alice Wairimu Nderitu, Under-Secretary General of the United Nations and Special Adviser of the Secretary-General on the Prevention of Genocide 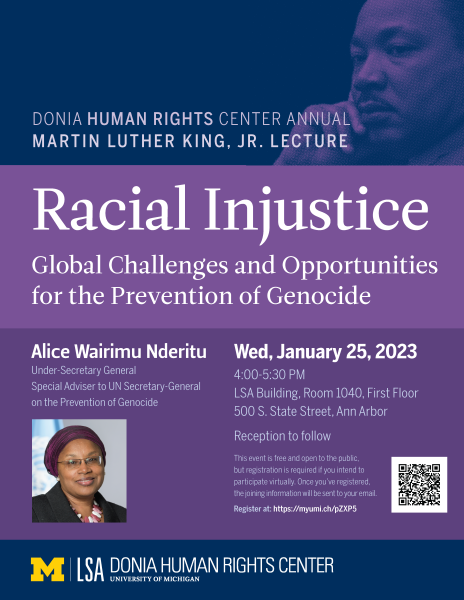 This event is free and open to the public, but registration is required if you intend to participate virtually. Once you’ve registered, the joining information will be sent to your email.

We are caught in an inescapable network of mutuality, tied in a single garment of destiny. Whatever affects one directly, affects all indirectly. Martin Luther King

We think of global history in the way it’s often taught- as a series of wars. Trojan War. Wars of Independence. First World War. Second World War. Historians often glorify wars and people who determine history are more often than not those who have fought physical battles in wars. If we changed the way the history of wars is written and rather than have the usual cast of heroines, heroes, rogues and villains show the misery, destruction, desolation, loneliness, fear, desperation utter ruin, devastation and despair of war what would the history of war against racism look like?

Would the history of war against racism look like an absence of political will, or a ticking of boxes; injustice, systemic bias in the criminal justice system, income and employment discrimination, absences of a people’s contributions in curriculums, unequal treatment in healthcare, denied opportunities for names not considered right?

Would it be about descriptions of those not like us and those like us, dominant and non-dominant groups? Could we bring to life the terror of this war against racism, in textbooks globally, including in homogeneous societies, of broken minds and bodies, the everyday fear of parents and give new meaning into what fuels feelings towards the “other” as seeing difference as a danger?

Would there be a winner, as expected of wars, and what would winning mean? Could this history give global implementable lessons on how young people could stop holding racist views based on pasts those who came before them lived and fatalistic thoughts about a future they are yet to see? Could a description of anti-racism work as a historical fact of war constitute knowledge on determining human attitudes and behavior as the most fundamental of struggles over the past and present, breaking down the mentality at the heart of the culture of racism and therefore becoming our global "inescapable network of mutuality, tied in a single garment of destiny?

Alice Wairimu Nderitu of Kenya is Under Secretary General and the Special Adviser to the Secretary General on the Prevention of Genocide. Ms. Nderitu is a recognized voice in the field of peacebuilding and violence prevention, having led as mediator of armed conflicts and in reconciliation processes. She was one of the first African women to sign peace agreements as a mediator, actively contributing in defining the role of women as mediators of armed conflict. She served as Commissioner of the National Cohesion and Integration Commission in Kenya, as well as Founding Member and co-Chair of the Uwiano Platform for Peace, that pioneered the use of mobile technology and conflict analysis to encourage citizens to report indicators of violence, linking early warning to early response. She was previously the Director of Education for Social Justice at Fahamu a UK-registered charity in Oxford head of the human rights education department of the Kenya National Commission on Human Rights and a founder of Community Voices for Peace and Pluralism, a network of African women professionals preventing, transforming and solving violent, ethnic, racial and religious conflicts worldwide.

She served as summer faculty at the School for International Training (SIT) Graduate School, Vermont, Brattleboro, and taught the socio-economic rights course at Pretoria University’s Centre for Human Rights, South Africa and the online course on Early Warning for the Auschwitz Institute of Peace and Reconciliation. She is an Aspen Leadership scholarship recipient and aTransitional Justice Fellow, Institute for Justice and Reconciliation, South Africa. She is the recipient of several awards recognizing her commitment to peaceful conflict transformation globally, especially commending her innovative approach to mediation of armed conflict. The awards include the Joan B. Kroc Institute for Peace and Justice Woman Peace Maker of the Year, Global Pluralism Awardee from HH the Aga Khan and the Government of Canada and the Simon Fraser University’s Centre for Dialogue Jack P. Blaney Awardee for Dialogue.

Widely published, she is the author of among other books, The Companion for Women Mediating Armed Conflict in Communities and Beyond Ethnicism: Exploring Ethnic and Racial Diversity for Educators, book chapters and the Seminal Paper Getting to the Point of Inclusion: Seven Myths Standing in the Way of Women Waging Peace co-written with Jacqueline O’Neill.

Ms. Nderitu holds an Honorary Doctor of Humane Letters from Keene State College and a Masters Degree in Armed Conflict and Peace Studies and a Bachelor of Arts Degree in Literature and Philosophy both from the University of Nairobi.