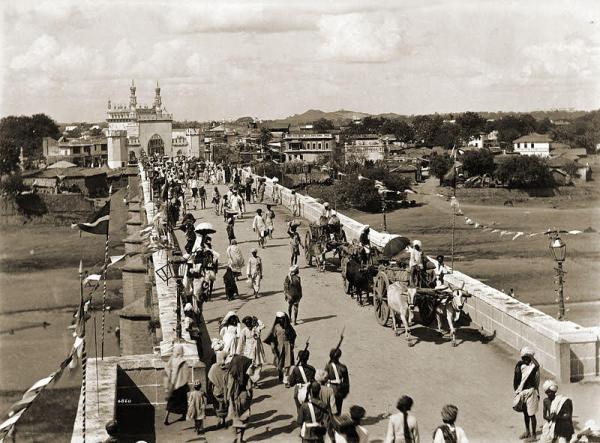 The conference will be hybrid. If you wish to participate remotely, please register here: https://myumi.ch/J89qx

The princely state of Hyderabad became home to a unique confluence of political debate, combining questions about the future of Muslim politics and states on the subcontinent with discussions of postcolonial federation. Hyderabad was a multilingual and multireligious society, a predominantly Hindu society governed by a Muslim king. What arose in Hyderabad in the colonial period was an emergent critique of monarchy along with an explicit desire for the continuance of the Hyderabad polity, either as a federated unit of India, or as an independent state, after the withdrawal of the British. Previously the history of linguistic nationalism that led to the formation of the first regional state of Andhra Pradesh immediately in post-independence India has been analyzed without any consideration of the history of the dissolution of its powerful neighbor, the princely state of Hyderabad. My current research analyzes the parallel development of public life, political modernity and the mapping of democratic futures in British India and the princely state of Hyderabad. Some were coordinated efforts, others were parallel but all were in dialogue with larger international discourses of self-determination and federation to ultimately rethink democratic futures towards a people-centered government in postcolonial South Asia. In this talk, I explore the meaning and implications of federation in late-colonial India broadly, as well as anticolonial nationalism's engagement with federation more specifically. Did federation proposals offer a break with the past or a continuation of empire? In broaching this question, I examine the discourse of federation and the debates over self-government and self-determination in the Telugu regions in both the Madras Presidency and in princely Hyderabad.

Rama Mantena is Associate Chair and Associate Professor of History and Global Asian Studies (Affiliate) at the University of Illinois at Chicago. Before UIC, she was Carol G. Lederer Postdoctoral Fellow at the Pembroke Center, Brown University and a Kluge Fellow at The John W. Kluge Center, The Library of Congress, Washington, DC. As a historian of Modern South Asia and the British Empire, her research is wide-reaching encompassing subjects covering Indian liberalism, the emergence of the public sphere and civil society in colonial India, practices of democracy in modern India, the study of historical methods and practices of history, and the comparative and transnational study of empires from the early modern to the modern world. Her first book, The Origins of Modern Historiography in India: Antiquarianism and Philology, 1780-1880 (Palgrave Macmillan, 2012), examines the emergence of modern practices of history writing and methods of arriving at historical truth in colonial India. The book argues that new practices of history in colonial India were disciplined by a distinct intellectual encounter, rather than the byproduct of a diffusion of ideas and concepts resulting from the imposition of colonial rule. Her current research and book project concerns the political imaginaries of the princely state of Hyderabad with its unique relationship within the British Empire and British Indian political and social movements. Political Imaginaries and the End of Empire: Anticolonialism, Self-determination and Civil Liberties in Twentieth-Century India (book manuscript) aims to rethink the period between empire and nation, the early decades of the twentieth century, which ushered in a new era of liberalism and the increased use of the language of political rights and self-determination with open-ended political futures. The book project is an attempt to braid together narratives of civil societal discussions on political life and citizenship with proposals of federated arrangements and calls for regional autonomy using the particular case of the princely state of Hyderabad and the emergence of Telugu nationalism in neighboring Madras Presidency.