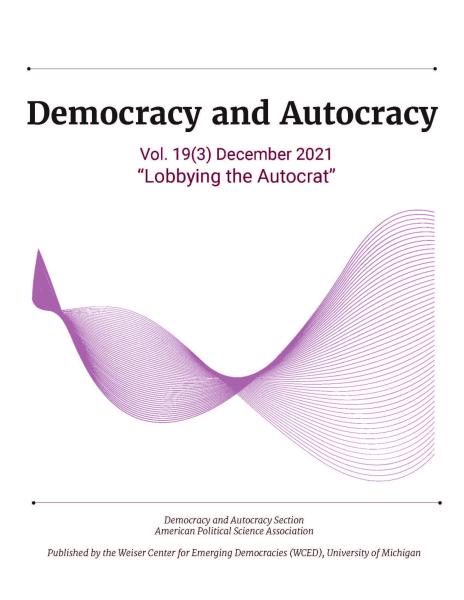 Who influences the world's most influential autocracies? Contributors to the latest issue of the APSA newsletter "Democracy and Autocracy," dedicated to the theme "Lobbying the Autocrat," will discuss both the unique characteristics of advocacy under autocratic conditions and similarities to those in democracies, with case studies from China and Russia.

Sasha de Vogel received her PhD in Political Science from the University of Michigan in 2021, and also holds an MA in Russian, Eastern European and Eurasian Regional Studies from Columbia University. Her research focuses on the politics of authoritarian regimes and collective action, particularly in Russia and the post-Soviet region, and has been supported by the National Science Foundation and the Carnegie Corporation/Harriman Institute, among others.

Manfred Elfstrom is the author of "Workers and Change in China: Resistance, Repression, Responsiveness" (Cambridge University Press, 2021). He has a doctorate from Cornell University and was previously a Postdoctoral Scholar and Teaching Fellow at the University of Southern California’s School of International Relations and a China Public Policy Postdoctoral Fellow at Harvard University’s Ash Center for Democratic Governance and Innovation. Before entering academia, he worked with non-profits supporting workers’ rights and improved grassroots governance in China.

Max Grömping researches interest group politics, comparative authoritarianism, and electoral integrity, with a regional focus on Southeast Asia. Max previously worked as Research Associate at the Electoral Integrity Project (University of Sydney), and as Lecturer at Heidelberg University, Germany. He was a visiting Research Fellow at the Social Science Center Berlin (WZB) in 2016/17. Max’s work has been published in "Political Communication," "Governance," "Party Politics," and "Democratization," among others.

David Szakonyi is co-founder of the Anti-Corruption Data Collective. His research focuses on corruption, clientelism, and political economy in Russia, Western Europe, and the United States. His book—"Politics for Profit: Business, Elections, and Policymaking in Russia" (Cambridge University Press, 2020)—examines why business people run for elected political office worldwide, how their firms perform as a result, and whether individuals with private sector experience make better policy decisions. Other research looks at the effectiveness of anti-corruption campaigns, employers’ mobilizing their employees to vote, and nepotism under authoritarian rule.

Jessica C. Teets is Associate Editor of the "Journal of Chinese Political Science." Her research focuses on governance in authoritarian regimes, especially the role of civic participation. She is the author of "Civil Society Under Authoritarianism: The China Model" (Cambridge University Press, 2014) and editor (with William Hurst) of "Local Governance Innovation in China: Experimentation, Diffusion, and Defiance" (Routledge Contemporary China Series, 2014), in addition to articles published in "The China Quarterly," "World Politics," "Governance," and the "Journal of Contemporary China." Dr. Teets is currently researching local governance under Xi Jinping.

Register for the webinar at: https://myumi.ch/P11PP