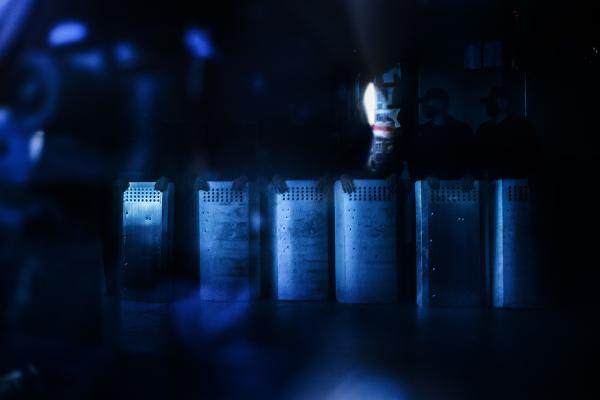 2017 marked the 23rd year of power of Aleksandr Lukashenko over Belarus. In those years, his opponents have been silenced, murdered, exiled, or imprisoned. Every few years he has staged elections that the international community has characterized as “unfree and unfair,” followed by police suppression of protester, quick trials, and lengthy prison sentences. Among the only voices reminding the world about the plight of those living under Europe's “Last Dictator” is the Belarus Free Theater, a critically acclaimed troupe consisting of actors still living in the country and their exiled founders. Award-winning photographer Misha Friedman started following the theater as they traveled the world on sold-out tours and performed underground plays at home. In 2020 Friedman returned to Minsk to photograph what everyone expected to be yet another déjà vu election cycle. That August everything turned out differently. Join us for a special viewing and discussion of Friedman’s work in Belarus from August 2020.

Misha Friedman was born in Moldova, and graduated with degrees from Binghamton University (1997) and London School of Economics (2000), where he studied economics and Russian politics. He worked in finance in New York, and after 9/11 switched careers to volunteer as a project manager at Medecins Sans Frontiers while teaching himself photography. Since 2009, photography has become his profession. He was associated with Cosmos Photo Agency 2011 - 2018, and is now represented by Getty Images. Misha regularly collaborates with leading international media and non-profit organizations. A Pulitzer Prize finalist, his widely-exhibited work has received numerous industry awards, including several Pictures of the Year (POYi). He has five monographs; his most recent book, Two Women in Their Time, was published by The New Press in 2020. Misha lives in New York City.

This hybrid event will be presented in person at 1010 Weiser Hall and via Zoom. Register for the live-stream at https://myumi.ch/dOmxj

If there is anything we can do to make this event accessible to you, please contact us at crees@umich.edu. Please be aware that advance notice is necessary as some accommodations may require more time for the university to arrange.
Center for Russian, East European, and Eurasian Studies
500 Church Street
Weiser Hall, Suite 500
Ann Arbor, MI 48109-1042
crees@umich.edu
A member of the International Institute
734.764.0351
734.763.4765
Sitemap
Facebook Twitter Youtube WordPress LinkedIn